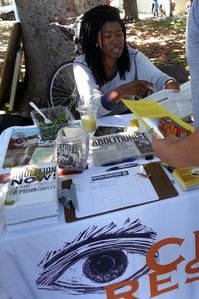 It has chapters in Oakland, Los Angeles , New York and Portland. It was founded in the mid 1990s by a group of activists including Angela Davis.

Key current issues that the organization has mobilized around include:

Critical Resistance Oakland can be found at:

It hosts volunteer nights on Mondays at 7pm. See the Website for more information.