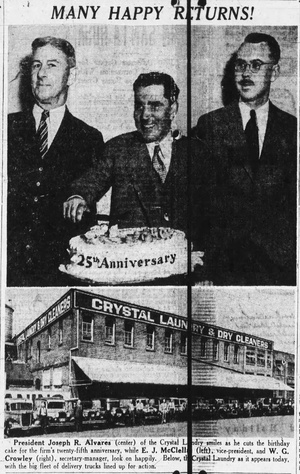 The laundry was probably started when 5 partners bought the Chateau Steam Laundry in 1911. 4 The business was initially in a barn; in 1914, they constructed a larger building. 2 In 1917, James W. Plachek (architect from Berkeley) designed an addition to the building on Chestnut Street for them, adding two stories. 1,2

In 1916, W. J. Hessler was the president, Joseph R. Alvares the manager, and D. H. Harvey the secretary.

In 1925, W. J. Hessler was the president-manager, Joseph R. Alvares the vice president, and W. W. Crowley was the secretary-treasurer.

From 1928-1941, Joseph R. Alvares was the president-manager, E. J. McClellan the vice president, and Josephine Freitas the secretary-treasurer. Alvares retired that year. The laundry closed a few years later because of a labor shortage during WWII. 3

Jack Budge, the father of Don Budge, worked for them as a driver in 1917–1918 (according to WWI draft records). The laundry had a baseball team in the Oakland Tribune Midwinter League c.1918–1923. 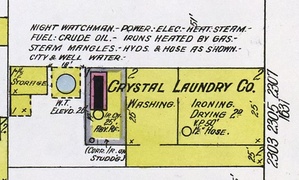