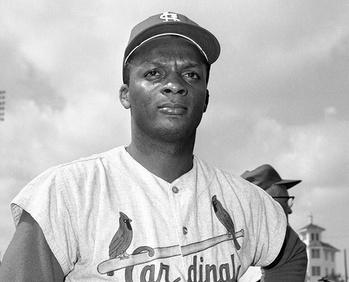 Curt Flood (January 18, 1938 – January 20, 1997) was a famous Major League Baseball player. He was born in Texas but moved to West Oakland when he was two years old. In his book, he describes himself as “having nothing,” and living in the ghetto. He discovered his athleticism at age 6 or 7 when he realized he was the fastest runner around. Then he found he could throw and was very coordinated. His first baseball position was catcher.

Flood first played for George Powles, a local coach who mentored many future baseball stars at McClymonds High School and at other local teams. Flood spoke very highly of Powles who “had no motives more exalted than good baseball and the benefits it offers.” Another of his mentors was Jim Chambers, an art teacher at Hoover.

Flood attended Herbert Hoover Junior High. He described himself as an extremely active child: he did scenery for school plays, painted house numbers, decorated show windows, babysat for his sister, and did as little schoolwork (and played as much baseball) as possible. He was a frequent visitor to Poplar Park.

Flood attended McClymonds High School. Along with Frank Robinson and Vada Pinson, he won the American Legion Championship under the direction of Powles. He later transferred to Oakland Tech, where he graduated. He started to realize that he could play baseball for a living, and hoped to play for the Oakland Oaks.2

Flood was partners in an engraving shop in Oakland, and was also an amateur artist: he sketched other baseball players in his spare time. One of his oil paintings of August Busch, Jr. (the owner of the Cardinals) garnered much attention, and he eventually was even commissioned to paint Dr. Martin Luther King, Jr. He also had a photography business, Curt Flood & Associates. 1

In 1956 Flood was signed by the Cincinnati Reds for $4,000. When he arrived in Florida to begin training, he had his first experience of de jure segregation when he showed up at his hotel and was taken to a boardinghouse for the black players. When he went to the minor league camp in Georgia, he realized that he was playing worse baseball than he had in the Alameda Winter League. He experienced serious racism in Georgia and North Carolina while playing minor league ball. The people around him hated him and he felt that his teammates also rejected him because of his race. By the end of 1956, Flood had a chance to play with a big league club in New York, and he was back to living “as a member of the human race.”

From Flood’s very first season he believed in the power of merit-based pay for ballplayers. At the end of the season, he spoke to the general manager of the Reds and detailed his amazing season. At the time, the Reds had “exclusive rights to [his] baseball services for as long as they chose to retain them.” Salary negotiations thus were based on this fact. The GM told Flood that the Reds were in financial trouble, that Flood wasn’t ready for the majors, and that he should use “common sense” to again accept $4,000 and a promotion to a higher minor league. Flood agreed.

After his second year in the minors, Flood was traded to the Cardinals, partly because the Reds did not want three black men in the outfield. The Cardinals paid him $5,000 for his 3rd season.

Curt Flood played for the St Louis Cardinals for 12 years. In 1969, at the age of 32, the Cardinals traded him to the Philadelphia Phillies, but he refused to go, violating the reserve clause, and he sued. Flood wrote, “The hypocrisies of the baseball industry could not possibly have been sustained unless they were symptoms of a wider affliction.” Although he was suing for what would become free agency in a time when blacks were militantly fighting for civil rights, he argues that “organized baseball’s policies and practices affected all players equally.” 1

The only approved position of the ballplayer, Flood explained, was the “tailwagging thanks for the opportunities provided by the employer,” whether or not they felt that way. Flood described over and over the insecurity players feel, but must hide, and so must be as much an actor as a baseball player. Negotiating salary is considered a betrayal to the club. Further, the “Hungry Ball Player” is considered an asset to the club and the game.

Flood believed the system of baseball’s financials was “irrational”; at the time, players got 20% of baseball’s total income. His opponents believed that his lawsuit would drive baseball into financial ruin, but he felt that it would move baseball’s owners only to reduced and more reasonable profits. He wanted them to follow the United States labor laws. Flood’s trade came on the heels of his vocal participation in attempts to make baseball’s structure more equitable.

Flood announced his retirement and prepared to sue. The Phillies were intent on signing Flood and offered him $100,000, a raise from the previous season’s $90,000. It is possible they wanted to rebuild, but they may have heard of the suit and wanted to avoid it. Flood decided he would sue and would not settle, no matter what. He told the player’s association what he was planning. They supported him. Justice Arthur Goldberg represented Flood and the case went forward. Flood maintains that he was not trying to get more money, but rather “trying to serve a human cause.” 2

In 1970, Flood’s book came out after years of attempted writing. Flood was struggling to survive, battling alcohol troubles, depression and anxiety from not playing baseball and the pending lawsuit. He was also facing problems with the IRS due to shady business practices with his photography business. Later that year the Washington Senators bought Flood’s contract from the Phillies and started negotiations with him. The lawsuit was still ongoing, but he agreed to terms with the Senators that included some of the things that he wanted to become law in MLB: no trades without Flood’s consent, and unconditional release if he and the club couldn’t come to terms for the next season. At the last minute, though, the Senators forced Flood to sign the reserve clause, and Flood signed the contract that made him “the property of a baseball club.” 3

Flood’s case lost in the Supreme Court, and the reserve clause stood. But it changed things, and three years later, free agency became a reality.