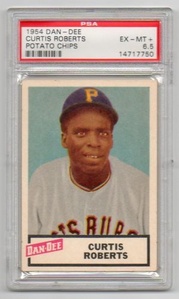 Curtis B. Roberts, Sr. is perhaps most well known for being the first African American to play baseball for the Pittsburgh Pirates. His first appearance a Pirates game was on April 13, 1954.

He was born on August 16, 1929, in Pineland, Texas, but was raised in Oakland. He graduated from McClymonds High School in 1947, and played for the Kansas City Monarchs in the Negro Leagues from 1947-1950.

He died in Oakland on November 14, 1969, after being struck by a car while he was changing a flat tire. He was buried in Evergreen Cemetery.