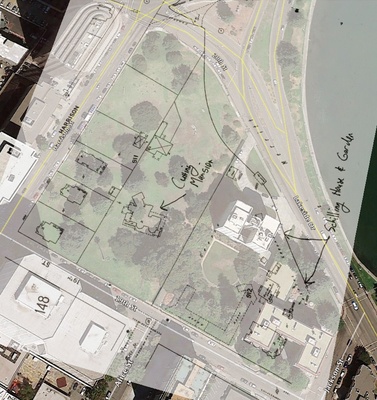 Google mapping reveals the extent of backfill of the current lakeside! 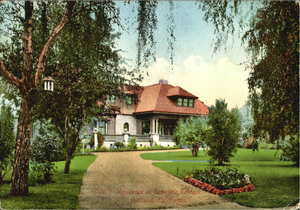 The Cutting Mansion was the home of Francis Cutting and his independently wealthy second wife, Sarah Abbie Kendall. Located on Lake Merritt’s west shore, it later housed the Snow Museum. Sarah Kendall is listed as having received a valuable joint property on Lake Merritt following her 1890 divorce from her first husband, Joseph Russell Kendall.</div>

Cutting and his new wife, who married in Oakland in 1897, built “one of the showplaces of the bay city” on the same large lot where they were living. The new house was listed at various times as

The grounds went to the shore of Lake Merritt, the first wildlife refuge in the United States.”

“It was the second Mrs. Cutting’s dream that after her death the house would be used as the campus for what became Starr King School for the Ministry. But the school needed to be in Berkeley, close to the University and other seminaries. Several years after Cutting’s death, the house was purchased by the City of Oakland, and was used as the Snow Museum to house a large exhibit of stuffed big game animals, the precursor of the natural history section of the Oakland Museum. The house is gone, but the land remains as a park – Snow Park, across the street from the Kaiser Building on Lake Merritt.” 1 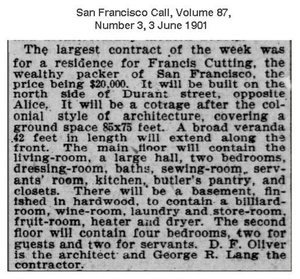 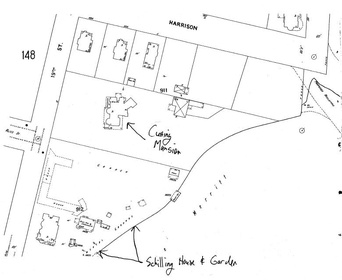 “The largest contract for the week was for a residence for Francis Cutting, the wealthy Packer of San Francisco, the price being $20,000. It will be built on the north side of Durant [today, 19th] Street opposite Alice. It will be a cottage after the colonial style of architecture, covering a ground space of 75×85 feet. A broad veranda 42 feet in length will extend along the front. The main floor will contain its living room, a large hall, two bedrooms, dressing-room, baths, sewing room, servants’ room, kitchen, butler’s pantry, and closets. The will be a basement finished in hardwood to contain a billiard room, wine room, store room, fruit room, heater and dryer. The second floor will contain four bedrooms, two for guests and two for servants. D. F. Oliver is the architect and George R. Lange the builder” (San Francisco Call, June 3, 1901, 7). (Other houses were being built for $2,000 to $5,000. With one at $10,000.)