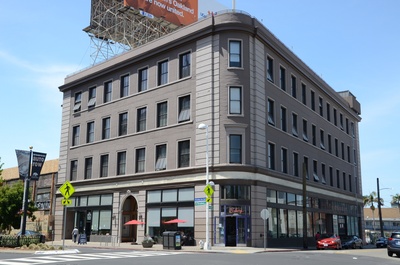 CC SA-BY Our Oakland
The Cuyler Lee Packard and Maxwell Salesroom and Garage Building at 2355 Broadway at 24th Street in Oakland was built in 1912 as a major automobile dealership. Designed by the prominent architectural firm of Willis Polk & Co., in the Beaux Arts style, the showroom contributed to the establishment of upper Broadway as Oakland's Auto Row. 1 Also known as the Packard Automobile Showroom and the Western Auto Building. 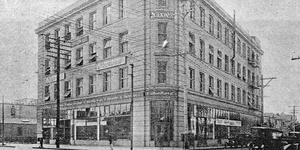 From  MPFCorp website; unknown sourceConsidered "one of the most complete service building on the coast" when it was opened by Cuyler Lee, who was the main Packard and Maxwell automobile dealer in Oakland and the San Francisco Bay Area.  At four stories high, the first floor was devoted to spacious showrooms and a garage.  There were garages on the second floor as well.  The third floor housed the repair shop and body repair division of the company, while the fourth floor contained the upholstery and top making departments. 2

In 1925, the building became the new Oakland main store, Northern California warehouse, and district offices for Western Auto Supply Co. It is not yet known how long the building was used by Western Auto.

From 1947 to 1977 the MacFarlane's Candy Company head office and factory occupied the building.

Saturn of Oakland occupied the building from ___ to ___, but is now long gone when the entire car line has been discontinued.  The old/dead Saturn website is the only references to this building as the "Cuyler Lee Building" rather than the Cuyler Lee Showroom," the name used by the current developer, which is itself shorthand for the (apparently) accepted name used in a few sources.

Currently, the building has been renamed Packard Lofts by the most recent developer to own the site. The bottom floor is occupied by Sweet Bar Bakery.

Note that the Draft EIR for the Broadway Grand project (August 2004) stated this about the building:

2355 Broadway: The building at 2355 Broadway is the former Cuyler Lee Packard and Maxwell Salesroom and Garage Building, constructed in 1913-1914. The four-story commercial building  was designed by noted architect Willis Polk in the Beaux Arts style. Presently, the building is occupied by the Saturn of Oakland auto dealership. The building was rated 3/3D (eligible for listing in the National Register individually and as a district contributor) by OCHS in 1983. The building is rated B+a1+,15 is listed on Oakland’s Preservation Study List, and is a contributor to Oakland’s 25th Street Garage District. For purposes of CEQA, this building is considered a historic resource.