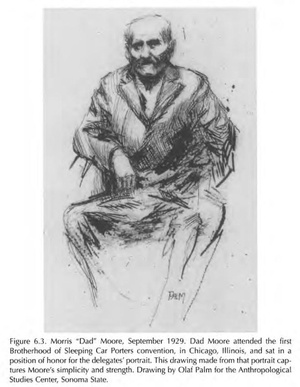 from Archaeology as a Tool of Civic Engagement 5

Morris Moore was born on March 15, 1854, somewhere in Virginia, to Lewis Moore and Mildred Turner. He eventually moved to Chicago and found work as a Pullman Porter. 4

After retiring as a Pullman Porter, he moved to Oakland and took charge of the sleeping quarters (two old sleeping cars) at the railroad yards for porters who were on call. He also worked extensively with the Brotherhood of Sleeping Car Porters (BSCP) union, acting as a mentor to C.L. Dellums. 5

Moore's most important work during the years 1926-1928 was to dissuade the Oakland porters, BSCP members or not, from voting for the proposals put forward by the Pullman Company for a so-called "Employee Representation Plan," under the auspices of the company-line Pullman Porter's Benevo­lent Association. Rejection of this plan was a crucial first step in the BSCP's efforts to be recognized as the legitimate bargaining agent for all porters. Moore argued against the plan tirelessly. The issue had national importance, and adherents of the Pullman plan were branded as "yellow dogs." Moore's letters to Webster, and reports which he sent to be published in The Messenger stress his opposition and his pride in the Oakland men's solidarity. Moore knew well that the issue could become violent. The Pullman Company knew it also. 4

The Pullman Company recognized the danger of Moore's voice, and took away his job managing the sleeping quarters, so he opened his own rooming house on Wood Street, which became the base of operations for the BSCP on the West Coast. One source says they also took away his $15/month pension, but another says that company records show they continued to pay it until his death. 4

A porter who knew him says “he could outcurse a drunken sailor.” And another recalls: “Dad Moore didn't have nothing but a pint of moonshine. He was in retirement. They gave him the job of taking care of the two old sleeping cars where porters stayed. He took care of those cars, woke the men up, and saw that they got on the job. The first time Randolph went out there, Dad Moore hooked up with Randolph with his drunk self. But everybody admired the old man. He preached Brotherhood to every man he saw coming in and out of the railroad yard in Oakland. He and the boys would share a bottle of moonshine at nights and he would preach Brotherhood. If you wasn't a Brotherhood man you had a hard time getting in his quarters. He worshipped Randolph. Whenever Randolph went out to Oakland, Dad followed him everywhere, with a bottle of moonshine in his pocket.” 6

Moore spoke briefly at the first convention for the Brotherhood of Sleeping Car Porters in 1929 in Chicago. 3

The Pullman Company eventually recognized the BSCP, but Moore didn't live to see it, dying January 20, 1930. Union founder and president A. Philip Randolph wrote an obituary for him in The Black Worker:

All Pullman Porters ...will mourn the passing of Dad Moore.... He was relentless and determined in his advocacy of the rights of porters to organize a bonafide union.... Despite the fact that he received a pension from the Pullman Company he was fearless in his denunciation of the injustices and wrongs practiced by the company on the men .... When we first visited Oakland he exclaimed. "I will go down with the ship if necessary, I will fight on regardless of the cost and as long as life lasts I will hold the banner of the Brotherhood high in the breeze. [He] was the noblest Roman of them all .... He has fought a good fight. He has kept the faith. He has never bowed to Baal ....

"The colored citizens of Oakland have lost through death during the past week two highly esteemed citizens. Notably Franklin Burrill, for many years head janitor of Oakland Municipal auditorium and leader in the Louisiana Commercial pre-Lenten pageant. And the passing of Dad Moore, one of the best known Pullman porters in the United States, also passed away after serving in that capacity for over 40 years. He heartily sponsored better working condition and more pay for Pullman porters." 1

Moore is buried in Evergreen Cemetery, where the inscription on his grave reads "Railroad Union Organizer". 2 The grave had been unmarked until Cypress Project historian William Alfred Spires re-discovered the location and had a marker placed. 4