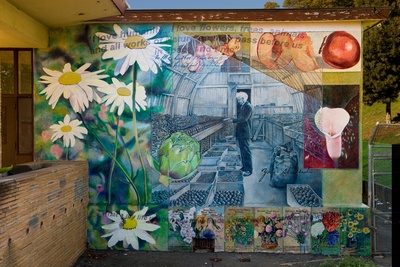 Dan Fontes (b. 1958) was born in Oakland and produces murals, paintings, photographs and has created dozens of works of public art throughout Northern California. He grew up about a mile from the Grand Lake Theatre near Lakeshore and attended Merritt College in the Oakland Hills for two years and received an AS (1978) in Earth Sciences as well as Cal State Hayward (now Cal State Eastbay) and was awarded a BFA degree in 1980.

As an assistant to many mural artists he studied under both Daniel Galvez and Richmond artist, John Wehrle for many years. Projects with Dan Galvez include: "Street Tattoo" (1981) formerly located at San Pablo and West Grand in Oakland beneath the 980 freeway, "Grand Performance" (1984) on Grand Avenue under the 580 freeway. "Guardians of the Past, Stewards of the Future" (2000, Washington, D.C.) and about two dozen others projects.

Fontes also assisted John Wehrle on multiple projects including the "Reflections" (1984) mural formerly located at 5th and Howard Streets in San Francisco, the Dublin Crossroads mural beneath the 580 and 680 underpass walls (Dan is depicted in the mural), the Valencia Town Center project, the "MacDonald Avenue" underpass, "Revisionist History" mural both located in Richmond, "Mak Roote Tracks" at the Berkeley Amtrak station and numerous other public murals.

He is perhaps best known for the "Giraphics" (1983) murals located beneath the 580 freeway at Oakland Avenue and the "Animurals" project (1985) as well as the "Lake Merritt Mural Project" (1987-88) formerly at 27th and Broadway. Two of his murals were gifts to Oakland's two sister cities Fukuoka, Japan (1992) and Dalian, China (1994) where he taught and traveled alongside Lana Rose conducting papermaking workshops. Rose and Fontes created the non-profit group Renaissance of Papermaking and taught classes in the Oakland public schools and throughout Northern California for many years.

Dan has been longtime volunteer board member of various arts organizations over the years including Renaissance of Papermaking, Pro Arts, the Lillian Paley Center for the Visual Arts, the Eastbay Depot for Creative Re-use, Health through Arts-signs of Recovery and most recently the Pacific Pinball Museum of Alameda.

To further the Pacific Pinball Museum's mission to preserve pinball art for future generations Fontes spearheaded the mural art program. While envisioning a use for the space above the 300 machines on display during the 2007 Pacific Pinball Exposition at Marin County's Civic Center, Fontes produced the 10' x10' hand painted canvas "Majorettes" in time for the show and began a pinball art movement that now includes notable Bay Area artists including Ed Cassel ("Gateway to Knowledge" mural on Oakland Main Library), Eric J. Kos and D'Arci Bruno. To date Dan has painted 10 of the 30 canvases as well as large scale graphics found inside the museum located at 1510 Webster Street in Alameda. The Pacific Pinball Exposition was the World's largest show of it's kind-Dan also created the poster art for the show during four of it's six years.

His many private commissions include works for the Federal Reserve Bank of San Francisco, Playland Not at the Beach of El Cerrito, St. John the Baptist Church also of El Cerrito, the Luther Burbank School of Oakland, Whales and Friends of Oakland, Straus Carpets of Oakland, Berkeley Natural Groceries, Susan's of Sonoma Bed and Breakfast, For Amusement Only of Berkeley and dozens of private home and business murals. Most recently he completed a 4' x 12' mural for the WesCafe Restaurant of Alameda entitled "Full Steam Ahead" (2014). His public art projects also include the 9 story "Salud!" (1997) mural located at the Bethany Senior Center at 21st and Capp Street in San Francisco which remains one of the cities tallest public art works. After living on a houseboat in Sausalito (2004-2009) he moved to a large waterfront warehouse in San Rafael where they present occasional houseconcerts with his partner Julie Lucchesi and their bulldog Marilyn Monroe.