Daniel E. Easterbrook, was one of 25 pioneers who founded the town of Downieville, California in the Sierra County in 1850.

Easterbrook and his wife Nettie (née Nettie A. Stone) were world travelers. Nettie donated the Easterbrook Bird Fountain to the city of Oakland in 1914.

Nettie and Daniel Easterbrook were patrons of Fabiola Hospital, were she served as recording secretary as well as Director during the hospital's 27 consecutive years.  Nettie also served as President of the Home Club of Oakland for six years.

"D. E. Easterbrook, capitalist" is listed as living at the Hotel Metropole in 1903.

Easterbrook may have been involved in a lawsuit ... Daniel E. Easterbrook vs. _____

Link to an Oakland Tribune article about Daniel E. Easterbrook dated May 27, 1911 which appears to be his obituary, [Does someone have an account?] [Yep, I have a NewspaperArchive account; here are three of the articles] 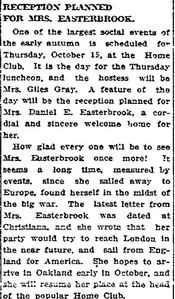