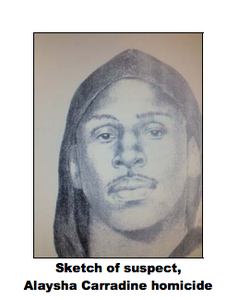 Update: On October 1, 2013, OPD held a press conference and announced that they had arrested Darnell Williams for the killing of Alaysha Carradine. He is the man pictured in this sketch.

On September 11, 2013, the Oakland Police Department released the following press release and sketch:

Oakland, CA — Oakland Police Investigators have released this sketch of the person they believe to be responsible for the homicide of Alaysha Carradine, 8 years old, of Oakland, that occurred on July 17, 2013, at 11:18 PM.

The SUSPECT is described as an African American male, 17-24 years old, 5’7, 160, with a thin, dark mustache. He was wearing a black hooded jacket and blue jeans.

BACKGROUND: On July 17, 2013, at 11:19 PM, Oakland Police officers were dispatched to the 3400 block of Wilson Avenue on a report of a shooting. When officers arrived on scene, they located four victims who were suffering from gunshot wounds.

This investigation is ongoing and anyone with information is asked to contact the Oakland Police Department Major Crimes Section-Homicide at 510-238-3821 or call the TIP LINE at 777-2805.