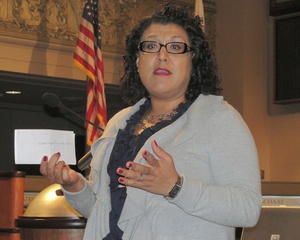 She was appointed in 2011 and was (reportedly) a key force in the city behind the decision to evict Occupy [source]. There were also many allegations of Santana interfering with attempts to reform Oakland’s police department.  Deanna was the key architect for a number of efforts at OPD including adding 85 police vehicles, procurement plans for essential technology, rebuilding the 911 Center to a modern state, developing the funding strategy for the six academies, and bringing in the (highly controversial) consultants Frazier, Wasserman, and Bratton to assist with improved training and practices.

After a long period of uncertainty as to whether Santana was leaving (see below under "is Santana Leaving?"), it turns out that she was.

On March 3, 2014, The Chronicle reported that Santana was resigning within the week, apparently because of an inability to get her job done, due to Quan and City Council getting in her way. Fred Blackwell, Jr., previously the assistant city administrator, was appointed the new city administrator.12 A later report said that Santana was surprised at being removed and suggested that she might go to Dallas, site of a previous failed bid for a job.13 Santana's severance pay totals $223,090 which includes half of Santana's annual $278,460 salary, plus cashed-out balances for vacation, sick leave and executive leave.14 Santana's departure was not without drama: City Attorney Barbara Parker tried to get Santana to sign a 22 page document that included a clause that Santana wouldn't say anything negative about her tenure at City Hall. Santana declined. The same night as Santana's ouster, Quan's office called to see if Santana would come back as a paid consultant. Santana hasn't ruled it out, as long as she doesn't have any contact with Quan.15

Why did Santana leave?

The Oakland Tribune reports: "several sources said Quan, who is up for re-election this year, decided to make the change following Santana's failed bids earlier this year to land city manager jobs in Dallas and Phoenix.  Insiders say that Deanna was well aware of Mayor Quan's low ratings and th fiscal uncertainty that has been ignored by both the Mayor and the City Council.

Sources said that Santana's public declaration that she was looking for a new job had undercut her authority inside City Hall. It also left the city in limbo, with leaders hesitant to fill several open top jobs within the administration as long as Santana remained in place as a lame duck administrator, sources said."   This is questionable, since the City Administrator is the only person that can appoint individuals to top jobs (not the Mayor or City Council) and she had recently done so (within a mater of weeks before her departure) by the appointments of:  Chief Information Officer, Human Resourced Department, and an Assistant to the CIty Manager.  Mayor Quan's low ratings impacted national recruitments and no one wants to work for Mayor Quan, as evidenced by her departure, Fred's, Anne's, and the high number of executives looking for work outside of Oakland.

Others also acknowledge that the impetus for her departure was the City's fiscal condition and the continued actions on the part of elected officials to continue to commit public funds that do not exist.  The City's fiscal condition is fragile and continuing to spend money that the City doesn't have is not a desirable position to manage as a City Administrator.  Insiders state that Deanna often found herself cleaning up fiscal messes that the Council or Mayor created.

As of 2012, City Hall valued Santana’s work, felt lucky to have her, and would do anything to keep her.2

In August, 2012, Santana accused Federal Monitor Robert Warshaw of making inappropriate comments to her and calling her “stunning.” 4 City attorneys filed a federal motion in court but withdrew it after these accusations became public. Jim Chanin, a lawyer representing the plaintiffs in the case that led to the NSA called this a stalling tactic on Santana’s part.5

In December 2012, it was rumored that Santana would be leaving her position, but she denied this.6

Dallas: On Dec. 11, 2013, The Dallas News reported that Santana was among five finalists for City Manager of Dallas. Santana’s contract is guaranteed through 2015, but given that 2014 is an election year, Santana may be looking around in case Quan does not get reelected or decides to pick someone else if she does.7 In January, 2014, Dallas announced that Santana is one of 3 finalists.8 She spent 3 days in Dallas being interviewed in January.9 On January 21st, the Dallas city council unanimously voted for the interim city manager to be appointed to the permanent position, thus ending Santana’s chances there (source). In a twist, the headhunter who recommended Santana for this position was the same one chosen to find a chief for OPD but then quit, alleging interference, especially on the part of the Mayor’s office. Question: does anyone know which came first: the recommendation of Santana for Dallas or the recommendation by Santana for this headhunter?

Phoenix: On February 11, 2014, it was reported that Santana was once again a finalist for city manager of another city, this time of Phoenix. (source) The Chronicle reports that getting the job would be “a big blow for Oakland.”10 Santana did not get the job.11

Former city employee Daryelle LaWanna Preston "said in a lawsuit filed in Alameda County Superior Court on Monday that then-City Administrator Deanna Santana fired her because she refused "to falsify oral and written reports" that accused Councilwoman Desley Brooks of abusing her authority and ignoring city rules to build a teen center in her East Oakland council district." - SFGate, 3/18/14  The allegations are questionable since both a Grand Jury Report and CIty Audit showed that the Councilmember acted inappropriately and, however, the Administration's report on this matter placed blame on staff for not acting appropriately during the time that the Councilmember took these actions.

In April, 2014, the Mercury News reported that Santana was a finalist for the City Manager of Sunnyvale.16 She was appointed to that position in May, 2014.