Delger Block refers to one of several buildings built by Frederick Delger.

All buildings but one on the Delger Block were destroyed in a massive fire on March 25, 1865, with damages estimated at $50,000. The fire began in a 7th Street restaurant in the middle of the night.

Most notable is a block of wooden buildings built c.1880-1884 by architects Kenitzer & Raun, located at 901-933 Broadway which still stands.

The 1880-81 structure housed the Bowman Drug Company, a pioneering apothecary firm. Bowman had been in business in California since 1852. In 1886 his store was called “one of the finest in the City.” Millinery and cigar stores filled out the street shops. Law offices filled the upstairs, colorfully recalled by Edward Rayner in 1954: “in the ‘80s, as a small boy, I was employed as “office boy” in the office of George E. DeGolia, one of the leading attorneys of that time. The office was located on the northwest corner of Ninth and Broadway in the Delger building, one of three duplicate buildings, each of a full block, on the west side of Broadway, and known in those days as the “Lawyer’s Block.” The George DeGolia Law Offices boasted the most comprehensive law library in the West, and the street front shop was occupied by Hardy’s, the first major bookstore in northern California.

The basement-level saloon, The Montana, was a popular hangout in the late 1800s, and the “skylights” beneath your feet along Ninth Street were its primary source of natural light. Work crews clearing out the saloon area during renovation discovered four poles believed to have been the supports of a boxing ring located in The Montana. 2

Notable tenants included the law firm of Metcalf & Metcalf in the 1880s-1890s, a partnership between George Metcalf, and later congressman and cabinet member, Victor H. Metcalf. 3

from Illustrated Directory of Oakland

The retail level was home to chain retailer Smart and Final for many years, while the entire 2nd floor was leased to Kaiser Permanente. 2

Northwest corner of 13th and Broadway 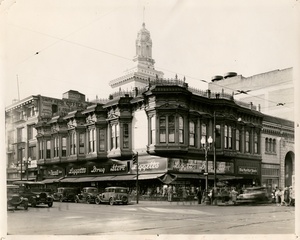 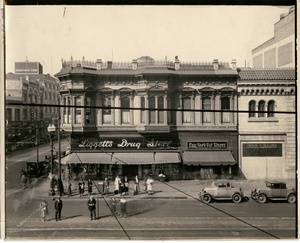 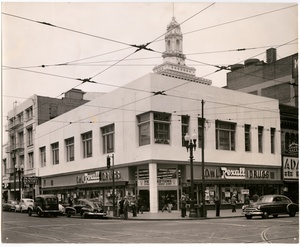