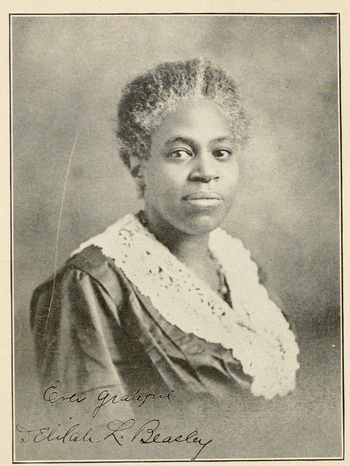 Delilah Leontium Beasley (September 9, 1867 or 1871 – August 18, 1934) was a columnist for the Oakland Tribune, and was the first African-American woman to be published regularly in a major U.S. newspaper.

Delilah Beasley was born in Ohio and moved to Oakland in 1910. In 1915, she wrote for the Oakland Sunshine 1. In 1919 she wrote the ground-breaking The Negro Trail Blazers of California, which documented for the first time the contributions of African Americans in early California.

From 1923 to her death in 1934 journalist Beasley wrote her weekly column for the Oakland Tribune entitled "Activities Among Negroes."

In 1925 Beasley represented the Tribune (and was the only black woman with press credentials at the conference) and the Alameda League of Women Voters as a delegate to the National League of Women convention held in Richmond, VA. In 1926 she covered and helped publicize the national convention of the National Association of Colored Women, which met at the municipal auditorium (now the Kaiser Convention Center.) Delilah wrote columns for the Tribune until the end of her life.

Delilah Beasley is the subject of a new publication, Trailblazer : Delilah Beasley's California by Dana Johnson published in 2019. It "celebrates the legacy of American writer Delilah Leontium Beasley, the first collector of the histories of black Californians, by reimagining her life through fictional and biographical writings." 4 and is part of a exhibit at the Huntington Museum.

She lived out her last years on 34th Street. 5 She died August 18, 1934. Last rites were performed at the St. Francis de Sales Church, and a memorial service was held at the First African Methodist Episcopal Church. 2 Beasley is buried in St. Mary's Cemetery.

There is some disagreement about the year of her birth. Her grave marker, obituary 3 and the 1930 census indicate 1871. Wikipedia says 1867, 1 but doesn't cite a source. Various articles say 1867, but use Wikipedia as a source or don't give one. While none of the sources for 1871 are definitive, they all agree. The exception found so far is the 1870 census, which indicates 1867. 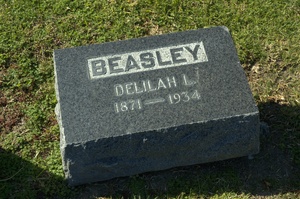 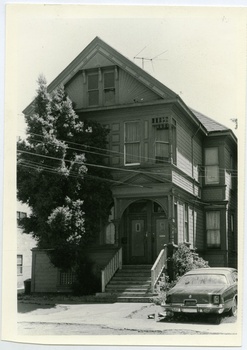