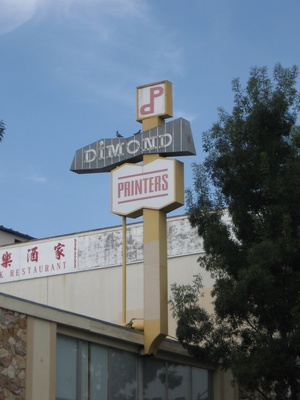 Dimond Bowl was an 8-lane bowling alley at 3525 Fruitvale Ave. from 1946 until the 1970s or 1980s. It was constructed in 1946 and modernized into a eight lane facility in 1947 by Sam Schect, a well known Bay Area bowler who was honored by the Alameda County Men’s Bowling association in 1970. 1 It was later run by Sam's son Artie.

Oaklanders recall playing in bowling leagues there. Some remember playing pinball, and a character named Miltie (Milton Pino) who hung out around the pinball machines. Students at Oakland High School and Edna Brewer Middle School (then known as McChesney) sometimes bowled there for Physical Education. 2

The current owners purchased the building 1985, and it has been home to Dimond Printers since then. As of June, 2015, the building is for sale. 1

A reader shares personal observations about the Dimond Printers: Never in 30 years of living in the Dimond District did I see any person (client or employee) enter or leave this business.  Peering in the front doors, you could always see a 1960's era office still life with metal desks covered in papers, no doubt with lots of carbon copies lying around.  The calendars on the walls always seemed up-to-date and things seemed orderly, but I NEVER EVER saw anyone inside.  This is the creepiest ghost business in all of East Oakland...I feel that perhaps it is a money-laundering front for the Alliance for the Annexation of Piedmont, or some other revolutionary organization.