Dominga “Dominguita” Loera Velasco (May 12, 1901 – October 11, 2015) was a Latino community activist, dancer, and restaurant owner. In the 1920s, Velasco and her family were among the first Mexican immigrants to arrive in Oakland from Texas. Later, she started promoting Latino culture and businesses in Oakland. The Unity Council and the Spanish Speaking Citizens’ Foundation were formed due in part to her activism.

The youngest of 5 children, Velasco was born May 12, 1901 to Atanacia Anton (Loera) and Teofilo Loera, a shoemaker. She was born in Jalisco, Mexico, but grew up in Coahuila, Mexico. Fleeing the unrest of the Mexican Revolution, the family immigrated first to El Paso, Texas, to join her older siblings. After 3 or 4 years, they came west to Oakland in 1922, a transition which was especially difficult for Velasco's widowed mother. "El Paso, Texas was like it was in Mexico. It is another Mexico, stores and everything in Spanish. And we got here and there was nothing like that. Not even corn tortillas—just those [made] of wheat flour and bread." 1

Sadly, Salvador contracted tuberculosis on a trip to Mexico, and unknowingly infected daughter Josephine. Both died within a few weeks of each other in 1946. 7

Velasco worked for the California Fruit Packing Company, but the work was seasonal, and the canneries closed after the fruit season. She then worked for the California Candy Company in Alameda. After 10 years, she moved to a candy factory in San Francisco, and had to commute by ferryboat. There she worked for 35 cents an hour (considered good pay in those days) dipping fruit in chocolate. The temperature in the factory was kept low so the chocolate could set, but over the years, this caused her pain, especially in her shoulder: "But those were the days of the Depression and there were no other jobs available. There was no help, no welfare. So I kept on working in spite of the pain." 3 Eventually the pain became unbearable, and Velasco left the candy factory.

WWII brought thousands of workers to the Bay Area, and Dominguita and Salvador started a restaurant called Chapala, after a lake in Mexico. Between other immigrants and contract workers (braceros), they had a steady stream of customers. After a few years of growth, they sold the restaurant. Salvador didn't much like the restaurant business. After owning and running a flower shop on Grand Ave. for a few years, they sold that business, too. 3,4 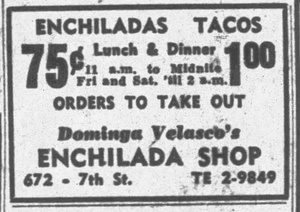 But she found it hard to quit running her own business, so she started another restaurant on 7th Street, the Enchilada Shop. There she got to know various city and community leaders.

In 1957, Velasco was the chef at the Steeplechase restaurant at Broadway and Piedmont Ave. 8

Velasco eventually retired, and in the mid-1970s moved into the Posada de Colores senior housing complex. 4

In some ways, retirement just meant Dominguita was getting started. She helped others start their own restaurants and small businesses, and volunteered at a retirement center. In 1964, Velasco helped others including founding executive director Arabella Martinez found the Unity Council. 3

She continued being active in the community until well over 100 years old.

She is one of the women featured as part of the "Sigame" sculpture, dedicated in 2001. Velasco was honored at city hall in 2004. The Unity Council's Casa Velasco Senior Housing in Fruitvale was named for her. 6

Velasco died October 11, 2015, at age 114 years. At the time of her death, she was the oldest resident of California, the oldest person born in Mexico, and the 7th oldest person in the world. Following her death, a memorial mass was held at St. Anthony's Church. 6