The Domoto Brothers Nursery (1880s–1930s) was the largest nursery in Oakland and the largest in California 5, and was so instrumental in the education of other nurserymen it was often referred to as "Domoto College".

Over the years it had a number of locations, but the main nursery where plants were grown is now Arroyo Viejo Park. They also had a branch outlet in San Francisco.

One of the first locations was 658 - 3rd Street in Oakland. In 1891 they moved from that location and advertised great bargains on "Mandarin Oranges, Mammoth Chestnuts, Persimmons, Plums, Ornamental Plants, Camellias, Axlieas, Magnolias, Tree Peonies, Palms, Wisteria and Bulbs; also 500 different varieties of Choice Chrysanthemums and 300 new varieties from Japan." 1

The best known brother was Kanetaro "Thomas" Domoto, born in Wakayama Prefecture, Japan. Several accounts say the brothers emigrated to Seattle then to San Francisco, working first as kitchen help, then in the gardens of Adolph Sutro. 2,4 Another account says the brothers were invited by Anthony Chabot to help market the tea he was growing in Temescal Canyon. 3 Whichever the case, Kanetaro and his brother Motonoshin "Henry" Domoto started a small nursery in Oakland in the late 1880s.

Initially, they primarily imported plants for sale to other nurseries. The Domoto Brothers were renowned for their chrysanthemums, roses, and other flowering plants. The nursery thrived and grew until the Great Depression in the 1930s. The Domotos and other Japanese Americans were interred during WWII, and Kanetaro died in the Amache internment camp in Granada, Colorado and Motonoshin in Minneapolis.

After the war, Kanetaro's son Toichi Domoto started a new nursery business in Hayward. His nursery became well-known for bonsai as well as other plants. 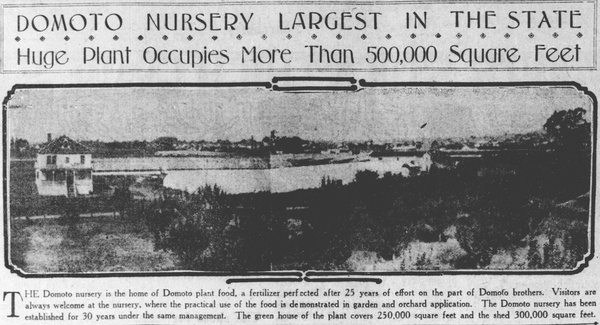 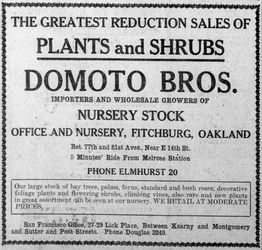 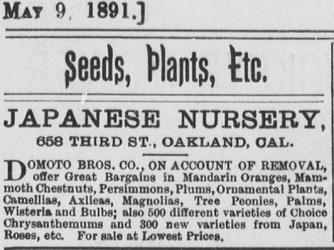 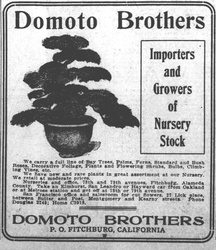 Also buried there are Kanetaro's brothers Mitsusaburo Domoto (1875–1912), and Motonoshin Domoto (1871–1943) with his wife Masae Domoto (1887–1918). Mitsusaburo's grave marker was erected by the Japanese Nursery Association. 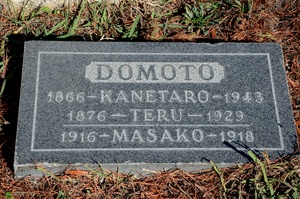 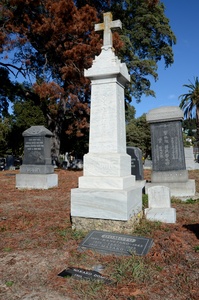