John Donald ("Don") Budge (June 13, 1915 – January 26, 2000) was a professional tennis player from Oakland. He was the number one player in the world for five years, and is a consensus pick for being one of the greatest tennis players of all time. 1 Budge was the first man to win all four of the major tennis titles in a single year, and the 'father' of modern tennis.

Budge was born to Scottish immigrant and former soccer player John "Jack" Budge and Pearl Kincaid Budge in 1915. 1 In 1917–18, Jack Budge was working as a laundry driver for Crystal Laundry at 2307 Chestnut Street, and the family address was listed 811 - 60th Street. 3 When Don was growing up, the family lived at 673 - 60th Street in Bushrod, just down from Bushrod Park, where the tennis courts now bear his name. Budge grew up playing baseball, but his older brother Lloyd introduced him to tennis while at UC Berkeley. Budge attended University High School.

But even though Budge had unknowingly developed a game-changing backhand, baseball remained his first love. Then, one night at the family dinner table, in May 1930, Lloyd issued a challenge to his fourteen-year-old brother. If you weren't so lazy, he told Don, you could win the upcoming California State junior championship. This is when Budge's competitive nature kicked in. He lived for the chance to compete.

So Don took up Lloyd's challenge. In his first round match against number-one seed Phil Carlin, Don scampered all over the court in dirty sneakers, a white T-shirt, and light-tan corduroys, and beat him. The next day, Don's father bought him the long white flannels befitting an ambitious tennis player. Budge went on to win the tournament. So long, baseball. 2

In 1938, Budge dominated amateur tennis, and became the first person to win the Grand Slam of Tennis, winning the Australian Open, the U.S. Open, the French Open, and Wimbledon.

WWII occurred at the height of Budge's career. In 1942 he joined the U.S. Army Air Force, and in 1943 he tore a shoulder muscle while running an obstacle course. His shoulder never fully recovered from the injury, but he continued to play at a high level.

Budge was given the Freedom of Oakland award in 1938. 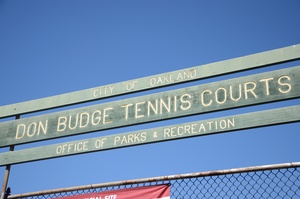