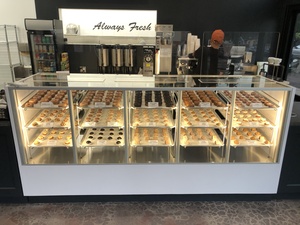 CC BY-NC-SA 2.0 bearlikemouseDonut Savant is one of the boutique fried gooderies of the East Bay, owned by Laurel Davis. Small in size and sparse in decor, this donut shop boasts full flavor donuts, such as the Thai Dust, the Boston Cream, and the Sean Pecannery.

The donuts are (apparently, haven't had them) a little bigger than donut holes and cheaper than the average fancy food at $.50-$1.00.

Donut Savant won "Best Gourmet Donuts" in the East Bay Express "best of" 2013. In 2015 they received the "Best Variation on a Cronut" Award. (a cronut is a donut/crossant combo that was so popular at a New York bakery that some people used to wait in line for up to two hours to get one).

Donut Savant has been selling cronuts since 2014. It appears that Donut Savant is calling them "crōn’t's" (which rhymes with "don't") possibly because the New York bakery has trademarked "cronut"?