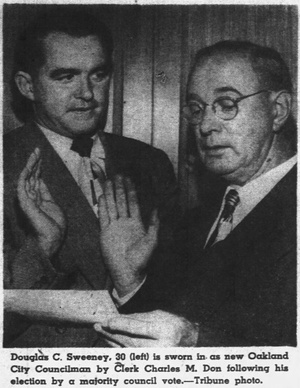 Sweeney was the brother of James J. Sweeney, Jr,, who was then a battalion chief and went on to serve as chief of the Oakland Fire Department from 1955 to 1972. Their father, James J. Sweeney, Sr. was a long-time veteran with the fire department.

After graduating from St. Mary's College, Sweeney enlisted in the U.S. Army in April, 1943. Sweeney served in Alaska and was honorably discharged in February, 1946.

Sweeney ran a clothing store with George Isola at 4069 Telegraph Avenue. He was a member of the Temescal Merchants' Association, and the North Oakland Optimist Club. 1