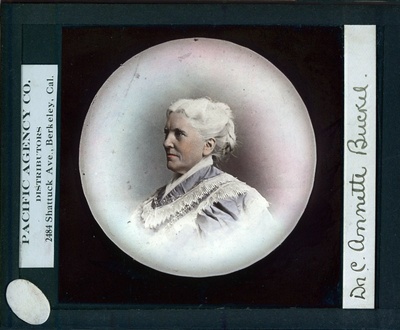 Born in Warsaw, New York, August 25, 1833 Dr. Buckel was orphaned before the age of four when each of her parents died followed by her grandparents. She was taken in by two young aunts who were strict disciplinarians.

Annette, as she was known, was an early reader and attended the local district school. By the time she was 14 she was teaching in rural schools. She decided to study medicine while still in her teens. To earn money for this purpose she took a job in a Connecticut burnishing factory, often studying Latin while she worked, her book propped up before her. She earned her M.D. in 1858 from the Woman's Medical College of Pennsylvania with her thesis on insanity and chose Chicago for the location of her first medical practice.

Washington Bartlett, California's 16th governor was her mother's nephew. Her mother, Nancy Bartlett Buckel died at 25 on January 18, 1837 in Florida at her brother Cosam Emer Bartlett's home of dropsy (edema). (2)

Although she was already a medical doctor, when Dr. Buckel heard of the tremendous need for nurses to treat injured Civil War soldiers, she volunteered to Gov. Oliver P. Morton of Indiana in 1863. Since "apparently neither the North or the South wanted to employ qualified women as physicians," 1 Gov. Morton sent her to Tennessee to "look after the condition and wants of Indiana's sick and wounded [Union] soldiers." While there Dr. Buckel sent up six field hospitals in stores and warehouses, and in December 1863 the Army's Surgeon General Joseph K. Barnes sent her "to visit the U.S. General Hospitals in the South west for the purpose of consulting with Medical Directors and Surgeons in charge upon the selection & appointment of Female Nurses" and was charged with appointing any persons she recommended. It appears that by September 1864 Dr. Buckel was in Louisville, Kentucky where she was the agent for Dorothea Dix in the selection and assignment of Army nurses. Following that position, she was appointed Chief of the female nurses at Jefferson General Hospital in Indiana where she served the remainder of the Civil War. Interesting to note that throughout her Civil War service she was always referred to as 'Miss Buckel' and not Dr. Buckel. Though she was remembered by those with whom she served as "The Little Major." (3) 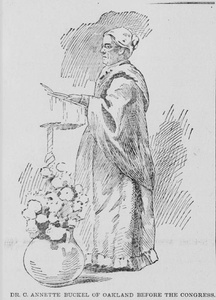 Dr. Buckel presenting at the Woman's Congress in San Francisco, from the May 5, 1894 San Francisco Call Moving to Oakland in 1877 due to ill health, Dr. Buckel opened her medical practice, and became the first woman admitted to the Alameda County Medical Association in June 1878. She was also appointed a consulting physician at the Pacific Dispensary for Women and Children which was founded in 1875.

She founded the Home Club, a women's association in Oakland, and formed a pure milk commission which worked to exclude cows with tuberculous from supplying milk to local dairies.

The 1910 census lists her living in Piedmont with Charlotte Playter, daughter of former Oakland mayor, Ely W. Playter, and describes her relationship as 'friend'.

When Dr. Buckel died just days before her 79th birthday, she left her estate to benefit 'backward and feeble-minded children' through Stanford University. 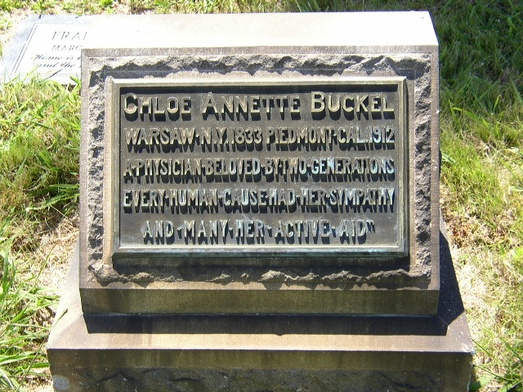