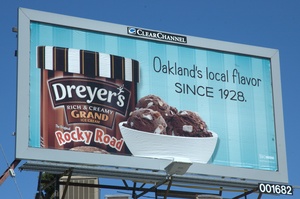 CC SA-BY Our OaklandWilliam Dreyer and Joseph Edy became partners in 1928, creating gourmet ice cream which was sold out of their Edy's Grand Ice Cream parlor on Grand Avenue in Oakland (some sources say the original parlor was named Dreyer's Grand Ice Cream ... both companies use 'Grand Ice Cream' in their name and claim credit).

The two partners ended their partnership on July 1947.

Dreyer's is now owned by Nestle, but still has its headquarters here, on College Avenue in the Rockridge district.