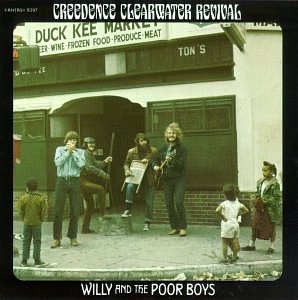 from Wikipedia. (fair use)

Duck Kee Market was a corner market at Hollis and Peralta, and was featured on the cover of the Creedence Clearwater Revival album "Willy and the Poor Boys".

The location is now the 'Bee Building' which is covered in a mural.