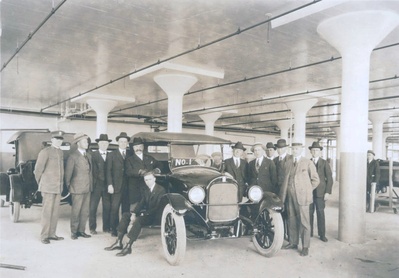 Mayor John L. Davie (standing beside passenger door), William C. Durant, his son Cliff (at driver's-side door) and others pose with the first Durant Four completed at the factory in East Oakland. (1922) 1

Durant Motors was an automobile manufacturer from 1921-1933 that had a factory in Oakland. The company was started by William "Billy" Durant who had previously been the CEO of General Motors. He started Durant Motors in an attempt to compete with GM. Billy Durant's son Cliff Durant served as president of the company.

The Oakland factory was at the northeast corner of East 14th Street (now International Blvd.) and Durant Avenue (also the boundary between Oakland and San Leandro). It produced vehicles for Durant Motors from 1921-1930. The building was subsequently used for the production of De Vaux automobiles, and was sold to General Motors in 1936 and used to assemble Chevy Trucks and also by the GM Truck & Coach Division. Much of the building still exists today, occupied by various stores and the Durant Lofts apartments.

Durant cars could be purchased at Star Cars, at 12th and Fallon Streets. 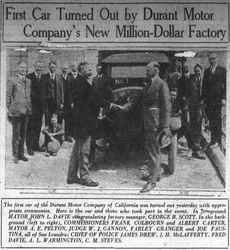 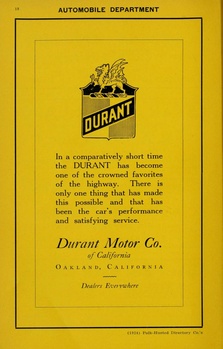