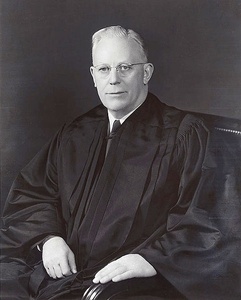 Undated photograph of Warren. Photo by Harris & Ewing photography firm, whose works have all lapsed into the public domain. (via wikipedia)Earl Warren (March 19, 1891–July 9, 1974) was an attorney, Deputy District Attorney and District Attorney for the City of Oakland, Attorney General of California, Governor of California, Republican Vice Presidential nominee, and Chief Justice of the United States. Most notably, while Warren  was Chief Justice, the court banned segregation in schools in the landmark ruling in Brown v. Board of Education.

As a young attorney, Warren worked at the Oakland law firm of Robinson & Robinson before enlisting in the U.S. Army in August 1917 to serve during WWI. After his military service Warren was a California Judicial Committee clerk and then served as Deputy City Attorney for the City of Oakland from 1920 to 1925. This was followed by his appointment as District Attorney for Alameda County, for which he was reelected to three four year terms from 1925 to 1939.

Although District Attorney Warren was tough on crime, none of his convictions were ever overturned.

As California District Attorney, Warren was "the moving force" behind the WWII internment of Japanese Americans. He later said he:

"since deeply regretted the removal order and my own testimony advocating it, because it was not in keeping with our American concept of freedom and the rights of citizens...Whenever I thought of the innocent little children who were torn from home, school friends, and congenial surroundings, I was conscience-stricken...[i]t was wrong to react so impulsively, without positive evidence of disloyalty." 1

From 1934 to 1943, Earl and his family lived at 88 Vernon Street, in what is now Clausen House, home to developmentally disabled adults. The Earl Warren House was designated City of Oakland Landmark #30 on December 4, 1979. Earn Warren also lived at 924 Larkspur Road within the Lakeshore Homes Association and part of the Trestle Glen neighborhood. 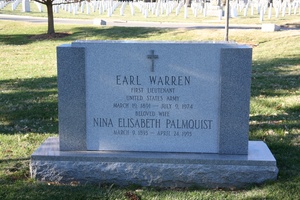