The Earle C. Anthony Packard Showroom was an automobile showroom at 2101 Harrison, designed by noted architect Bernard Maybeck and constructed in 1928. The building was later the home of Herrera Buick. It was torn down in 1973 or 1974. The location is now the site of the Cathedral of Christ the Light complex. 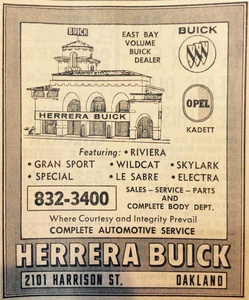 Earle C. Anthony was the Packard distributor for all of California.  The year before, in 1927, Anthony had also commissioned Maybeck to design a classically inspired showroom on Van Ness in San Francisco for his Packard franchise there.  Anthony was progressive in deploying showy and exotic architectural showrooms as marketing strategies, and Maybeck's broad training suited these ends.  Anthony's house in Los Angeles was also designed by Maybeck.  In 1923, Anthony installed the first neon signs in the U.S. at his Los Angeles dealership.2

The showroom was the site of the first California Spring Garden Show in 1930, and an estimated 15,000 people saw the show in one day. 3

Herrera Buick was owned by Andy Herrera; he also sold used cars at 3043 Broadway. Herrera had been the sales manager for Murphy Buick. 4 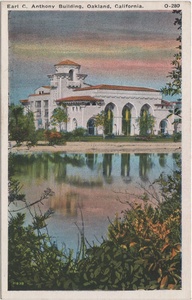 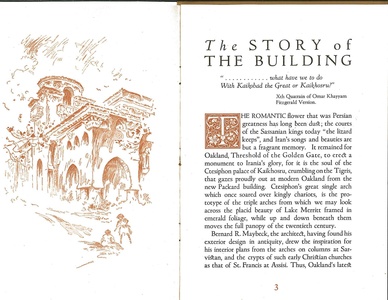