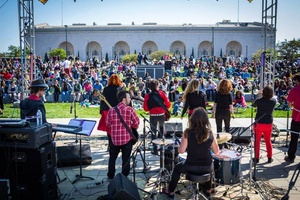 "If music is dead... we have killed it. It is up to us to rebuild it. Not Spotify. Not Clear Channel. Not anyone else, but us. Let's reframe performance, space, value and control of our cultural diet.

Evermore so, the arts are facing severe defunding across large institutions, devaluation through condensed mp3's online, and gutting of public funding for classroom art programs. Increasingly, fewer and fewer children, particularly in Oakland, get a chance to feel the dynamic rush, energy and magnetic appeal of a live instrument, band or vocalist beyond the four corners of their computer or smartphone screen.

The Eastlake Music Festival was the recipient of the East Bay Express Best New Cultural Event Readers' Poll Award in 2014.