The Eastmont Mall, now called the Eastmont Town Center, is a mall which went bankrupt. Although it's still privately-owned, it's now oriented around renting space to social service providers and other community-oriented organizations:

In April 2015, the majority of the Eastmont Town Center sold to Vertical Ventures for $54.5 million.2

The complex was constructed on the site of the former Chevrolet Assembly Plant, which had closed in 1963. The first retail structure was a set of inline stores anchored by a Safeway supermarket and drug store, which opened on May 18, 1966. 3 The remaining inline stores opened in 1967. The enclosed portion of this shopping center was designed by William Pereira, and opened in November 1970.

Eastmont Mall was once a bright spot in the urban landscape of East Oakland, with many nice shops and department stores such as a Safeway grocery store, Mervyns, Woolworth dime store, Grodins, Roos Atkins, New York Fabric, Hallmark Card shop, Gallenkamps shoes, Kinney Shoes, and so much more, all in one location! There was even a movie theater with four screens, which showed first run films!!

One by one the stores shut down and moved away until there was almost nothing in it.

In 1992 "Jack Sumski, a veteran Bay Area real estate broker and mortgage lender, [foreclosed] on the bankrupt Eastmont Mall located in East Oakland. After a year-long battle with the bankruptcy trustee, Sumski was able to take possession of a property representing by far the largest real estate loan he and his partners in Bayside Mortgage & Loan had ever made." [Oakland Post, 2003-12-07]

In 1993 "Jack Sumski and Bob Bridwell became the owners of the largest commercial retail property in Oakland. Faced with the huge empty space, and unable to find retail stores that would sign leases in the mall, Sumski and Bridwell hit upon a novel if desperate idea – to court social service and community-oriented organizations instead. Since recipients of such services already lived near the mall, bringing the services to the area would be beneficial all around. As owner Bridwell described, “The redevelopment followed a traditional model, but instead of using retail as an anchor, we used community services” (qtd. in Tate 2005). ...

With its change in occupancy came the ambitious new renaming of the space –“Eastmont Town Center.” Owner Sumski explained, “It's a Town Center. A Town Center is a place where the community can come” (qtd. in ABC7 2004)." [from "Civic Sideshows: Communities and Publics in East Oakland" by Cristina Cielo at the Dept of Sociology at UC Berkeley] 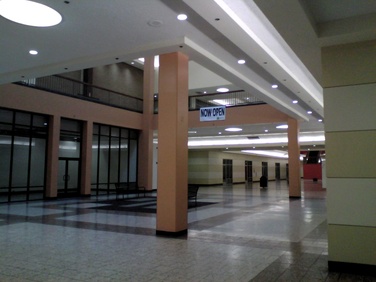 There's still a lot of vacant space in the mall. (by mk30)The Eastmont Town Center is now home to the Oakland Police Department Substation.

This area is part of the East Oakland food desert. Except for the supermarket at Eastmont, there are few large grocery stores in the area. 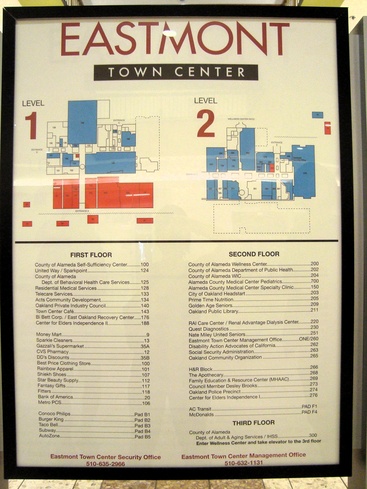 Click the picture to see it big! photo by mk30