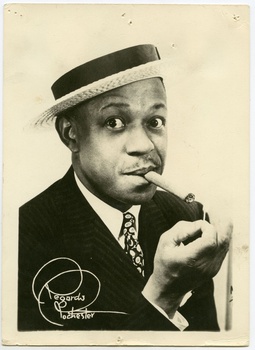 Edmund Lincoln Anderson (September 18, 1905 – February 28, 1977) better known as Eddie "Rochester" Anderson, was a comedian and actor from Oakland. He was the first African American to have a regular role on a nationwide radio show. His most famous role was Rochester van Jones, usually known simply as "Rochester", the valet of Jack Benny on The Jack Benny Show.

Eddie was born September 18, 1905 in Oakland to Edmund "Big Ed" Anderson, a minstrel performer, and Ella Mae Anderson, a former tightrope walker. The family moved to San Francisco when Eddie was 10.

He was the cousin of Ambrosia Wysinger Jones.