Edmond D. Hogan was an early resident of Oakland, variably referred to as Edmund, Edmont, Ed and "Old Man Hogan". He was an eccentric land-holder, and his estate was contested over a number of years, as various claimants disputed its distribution. He is referenced in several articles in the Ye Olden Oakland Days series. He had a son James T. Hogan, and potentially other children, according to litigation. He was born in 1797 in Ireland, and died October 11, 1883 in Oakland.

DEATH OF AN ECCENTRIC.1

Edmund Hogan, a Well known Character, Passes Over to the Silent Majority

Edmund Hogan, an old and well known citizen of Oakland, died last night, about midnight, at his residence in North Oakland. He was 86 years of age, and had lived in this city upwards of thirty years. He came here in early days, and with his earnings as a laborer purchased real estate, and by lucky speculation in this class of security amassed a fortune variously estimated at between $50,000 and $100,000. Twenty years ago, he camped on the site of the present Galindo Hotel, and tradition says that he endeavored to hold it by pre-emption rights, but was finally ousted, after tedious litigation. Hogan was a strange compound of shrewd business capacity, obstinacy and the faculty of taking advantage of fortunate opportunities, sometimes designated "luck." Ever since acquiring his property he has been in

With somebody, oftentimes on the most trivial matters. On one occasion he had trouble with one of his tenants and the latter threw a clod of earth at him striking him between the eyes and causing a large quantity of blood to flow. Hogan immediately sued the obstreperous and belligerent tenant and was awarded $299 damages in the Justice Court. On another occasion he had a feud with a man named Marshal Curtis, and when the latter's barn was burned Hogan was arrested for arson, but the evidence was insufficient, and he was acquitted. Shortly after, he came in contact with a son of Curtis and a fight ensued, during which he was stabbed by young Curtis and came near dying. Several years ago, he attempted to sell cabbages without a license and notwithstanding the fact that the cabbages were of prime quality, luscious and delicate of flavor, the city authorities had him arrested and fined for peddling without a license. For some time after, he went about giving his cabbages away, considering this a sweet revenge for the indignity that had been heaped upon him. At an election shortly after, Hogan came to the polls bearing

garnished with carrots, beets, turnips and radishes, calling the attention of the voters to the tyranny of a government that "taxed the produce of the earth.” He was a constant attendant upon the sessions of the City Council, and for years scarcely a morning passed that did not find him in the lobby of the Police Court. He was frequently before the latter tribunal, either as a prosecutor or defendant, in every grade of misdemeanor known to the statutes or ordinances. He was continually in hot water with his tenants or the small boys of the neighborhood, and it is said that he often drove the boys off his premises at the muzzle of the shot-gun. He was very close in his dealings, and it is asserted that he was extremely parsimonious even in the purchase of food, living frugally on what he could obtain from the bakeries and markets at the smallest possible cost. He squandered large amounts in litigation, however, and on one occasion, after selling a portion of what was known as

At auction, found that R. Dalziel had, as Hogan considered, secured one lot surreptitiously, that is, it had been purchased for Dalziel by a third party. Whereupon, having a profound enmity for Dalziel, he refuse to deliver up the deed until compelled to do so by the Courts. Dalziel then placed James T. Hogan, the son of "old man" Hogan, in possession and he has retained it ever since, much to the old gentleman's disgust. He was not on very good terms with this son, who is now about 45 years of age, and a rumor was prevalent on the streets to day that Hogan's will does not mention his son at all, the estate being bequeathed wholly to the Catholic Church. Another rumor was abroad to the effect that most of the property had been left to Mrs. M. Cunningham, his niece. It was generally understood, however, that James Hogan had been "cut off," and much regret was expressed that such should be the case, as the son is highly respected in the community and regarded as deserving of every consideration at the hands of his father. Hogan had been ailing for some time past, and his death was not unexpected. The funeral will be announced hereafter.

At four o'clock this afternoon Hogan was still alive, but was not expected to live.

Hello Boys! Do you remember old man Hogan, who lived at the southwest corner of Eighth and Franklin streets, where the old Galindo Hotel building now stands? His shack was like a big drygoods box: it had no windows, just a slide door and stove pipe through the top.

Some times at night some of us boys would put our backs up against the shack and make it rock, then he would come out and get after us with a big club. On Sunday mornings. Sometimes, he would take two large hogs that he had, a rope tied to each one's hind leg, then take them to church with him; and while he was in Father King's church, had the hogs tied to an oak tree in Jefferson Square so as to let them eat acorns: then after church he would drive them home again. He was a great character.

Then there was Henry Vrooman, afterwards one of our ablest lawyers, who then had a blacksmith shop on the east side of Broadway, just north of Eleventh street. He was a hard working man in the day time but studied law at night and afterwards made a great name for himself as a lawyer, and also became state senator. Some of us boys used to help him along by blowing the bellows for him; and if we wanted a hammer or a wrench, we would just take it along, use it and bring it back any old time: then he would go up "in the air" and drive us out of the shop. But it was no use, he had to have us boys around the shop, as he could not get along without us, we being the power behind the bellows." Sometimes he would come out, look around for us and say, "Boys, come in and give me a lift with the bellows and anyone that wants any tools, just help himself, but please bring them back soon." But we did about as we pleased.

"How about Hutchinson's Nursery at the northwest corner of Broadway and Ninth street?" Well, at that time, let me tell you it was some nursery. In 1862 I lived just north of it, on the next lot. His next move was to Fourteenth street, west of Broadway. and then one block farther west, between Washington and Clay where he was for many years. That's the way I remember it. "You heep sabe me, I sabe you." 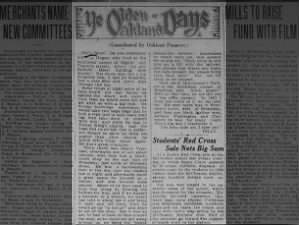