The school now known as Edna Brewer Middle School, which was originally known as McChesney Elementary School, and later as McChesney Junior High School, was constructed in 1913 at the corner of 13th Avenue and East 38th Street in Oakland, California. The school was named after Joseph B. McChesney (1832-1912), founder and first principal of Oakland High School. A November 30, 1913 article in the Oakland Tribune noted that the school was to be completed the next day, December 1, 1913, at a total cost of $74,865. The building was designed by architect John J. Donovan. 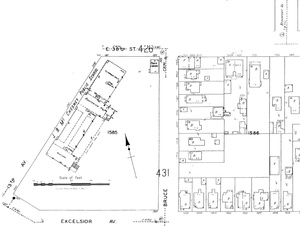 In its original configuration, the school's campus was only about half of its current size. As shown on this excerpt from a pair of adjoining Sanborn maps from 1928, Bruce Street formerly connected Excelsior Avenue and East 38th. Street, and Beaumont Avenue ended at East 38th Street. Note also that the "public library" shown on this Sanborn map at the corner of Bruce and East 38th Streets is in the approximately location of a building identified as the Swett Annex Public School on the 1911-1912 Sanborn map for the area.

In 1957, the City Council approved the closing of Bruce Street to permit the expansion of the school, despite oposition from the City Engineer and Traffic Engineer.  In 1957 and 1958, the OUSD acquired a number of homes on Bruce Street, Excelsior Avenue, and East 38th Street in order to expand the school. A March 5, 1958 article in the Oakland Tribune noted that the OUSD Board acquired an option on one property on Bruce Street at a price of $9,400, and also auctioned off eight homes in the "McChesney acquisition" area -- presumably so those houses could be relocated to vacant lots nearby.

In 1960, the OUSD sold off the easternmost portion of the newly acquired property to the City of Oakland in order to permit the construction of the Beaumont Avenue extension between East 38th Street and Excelsior Avenue. For some time, the City of Oakland's list of parks included an alleged Beaumont Park at the corner of Beaumont Avenue and 38th Street -- on the Edna Brewer campus -- but the City recently determined that this park did not exist.

In 1985, Edna Brewer, beloved principal of 14 years, retired; she passed away 2 years later. In 1989, the school was renamed in her honor. It is only the second school in Oakland to be renamed in honor of a woman. The school now has an address of 3748 13th Avenue, 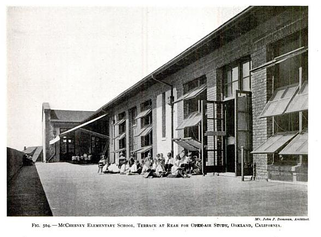 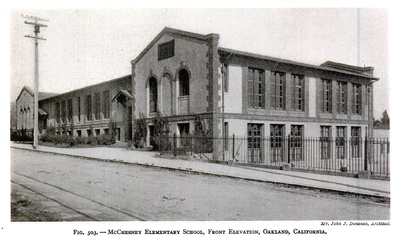