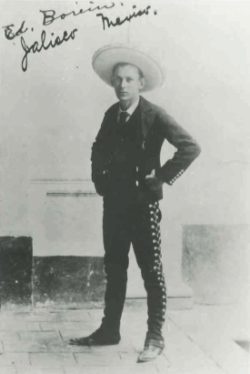 John Edward “Ed” Borein (1872 ‐ 1945) was an etcher and painter, who like Frederic Remington and Charles Russell, accurately recorded what he saw in the American West. Borein also worked as a vaquero (early cowboy) in early California and Mexico. He was friends with Russell and actor Will Rogers.

Borein was born in San Leandro, the oldest child of Alameda County official (recorder, auditor, tax collector, at different times) Peter Rouble Borein and Annie Blake (Borein). 2 The 1880 census shows them living at 323 - 6th Street. Later, the family lived at Alice and 11th Streets, and Borein attended Harrison School. His siblings were Charles Ashley Borein, Peter Rouble Borein, Jr. (aka Rouble Sims), Lucinda “Lulu” Borein (Faierling), and Annie Borein (Price). The family was friends with attorney A. A. Moore. Peter and Annie divorced c.1897. 7 Following the death of his mother in Quincy, IL in 1901, Peter drank until he died. 11

Ed Borein was a member of the Reliance Athletic Club 8 and the Charros Club. Around 1905-1906, he was partners with Royal B. Ford in a design firm, Ford and Borein.

The 1909 directory lists John E. and mother Annie living at [4051] Lyon Avenue near High Street, and John Edward having a space in the Blake Block. 3 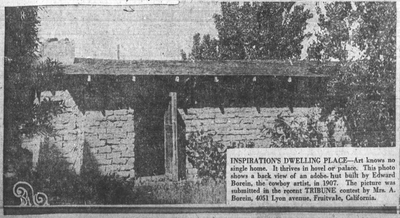 He married Lucile E. Maxwell (Borein) on June 27, 1921 5 and they settled in Santa Barbara. The Santa Barbara Historical Museum now holds the largest collection of Borein's work and personal possessions. 1 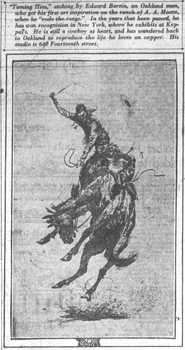 The Santa Barbara Historical Museum is looking for the following photos for a book project: