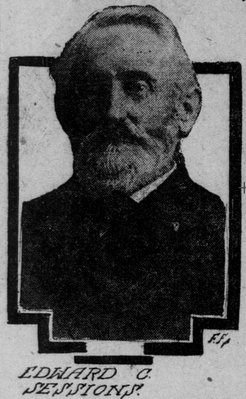 from SF CallEdward Carthcart “E. C.” Sessions (January 7, 1836–October 27, 1906) was a leading real estate developer and landowner, as well as president of the Oakland Bank of Savings and publisher of The Real Estate Gazette.

Sessions owned much of the land near Highland Hospital (Highland Terrace and Tuxedo neighborhoods) and also owned and operated a horsecar lineHe created the Highland Park & Fruit Vale Railroad in 1875 to access the newly subdivided land near Highland Hospital and in the Dimond 3 He also owned and operated the East Oakland Street Railway. In 1890, he patented his own doubledecker streetcar or trolley. This fancy trolley system was taken over by Borax Smith’s Oakland Transit Co in 1898.

In 1869 there is a ‘Sessions Block’ listed as being located between 11th and 12th Streets. His occupation was listed as real estate, with offices at 507 California Street in San Francisco, and residing on the corner of Jefferson and 12th Street in Oakland.

Commencing on November 7, 1868, Sessions began the publication of The Real Estate Gazette, which contained a table of all real estate transactions in the townships of Oakland, Brooklyn and Alameda for the two years’ span ending on November 1, 1868. Sessions also had maps of Oakland (with “E. C. Sessions, Agent for the Sale and Purchase of Real Estate” prominently displayed) printed to help with real estate sales, including a map around 1869. 5

Sessions’ name appears frequently in real estate transactions of the time, selling or supervising sales of everything from empty lots (including one to Flora Wellman, Jack London’s mother) to the former University of California property in downtown.

In 1876 he was listed in the Oakland City Directory as one of the ‘moneyed men of Oakland’ who had invested largely in an ‘elegant homestead’ ranging in cost from $8,000 to $40,000 each.

E. C. Sessions was elected vice-president of the board of directors of the recently-formed California Cotton Mill Company in 1884. 6

Sessions founded and promoted the area around Highland Hospital, but it was hard to sell. He created “a decorative border of alternating eucalyptus and cypress trees” and built a picnic park, all in the attempt to sell more land. 1

Sessions was on the Board of Trustees of the First Presbyterian Church in 1869.

Mary Drum Sessions was a member of the Ebell Society.

Son Edward was an early advocate for building the navy base in Alameda. 4

Sessions died October 27, 1906 after a brief illness. He’s buried in the E. C. Sessions lot in Plot 2 of Mountain View Cemetery along with Mary, son Harry, and son Edward. Rev. John and Eliza are also buried there, along their other children, Edward’s brother John Winne Sessions and sister Helen Eliza Sessions (Kinney). 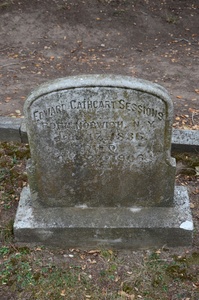 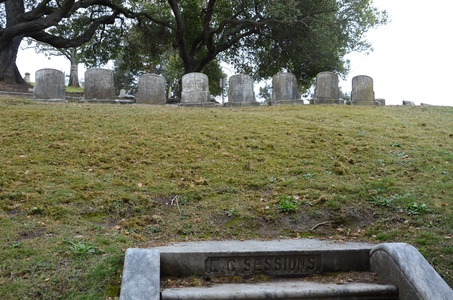