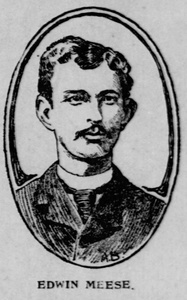 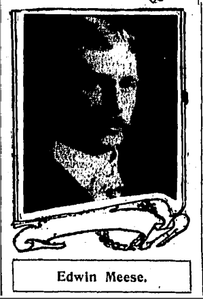 Meese when appointed to treasurer4

Meese went to school in Fort Wayne for 4 years and then came back and attended Heald's Business College in San Francisco, class of 1876. He joined his father's company, Bay Sugar Refinery which was the first sugar refinery on the West Coast. He then went into the insurance business. He was a member of the Board of Trade and the Nile Club and director of the Chamber of Commerce. 2 He was involved in the creation of the Chamber.

In 1908, Richard B. Ayer resigned from his post as City Treasurer/Tax Collector. He had been appointed to the position in 1906 then elected in 1907. He resigned and Meese took the position on April 1st, 1908 when Mayor Mott appointed him. Allegedly Ayer resigned to continue in his personal business affairs, but it was noted that the whole thing was handled with great secrecy. 3It appears he must have been on Council in 1907 as well, but this is not indicated by the election book. Will have to come back to this.

In 1912 Meese was accused of serious misconduct in his post as Treasurer/Tax Collector and charges were brought in Superior Court. 5,6 Meese denied the charges, and said MacMullen was doing it to "get even." 8 C. S. MacMullen failed to substantiate his charges, and the suit was dropped. 7

Meese was a Lutheran and active in German Lutheran affairs in the state. His father, Hermann Meese, was the first president of the congregation of the German Evangelical Lutheran Zion Church.

The public life of Oakland has embraced Edwin Meese within its progress for the last fifteen years.

Mr Meese is essentially a Californian and has grown up with Oakland. He is now candidate for commissioner No. 2 and is causing it to be thoroughly exploited that he wants to be the next commissioner of revenue and finance. Edwin Meese's father was one of those gritty pioneers who came west in 1850 and who made a success of his life.

Edwin Meese was born in San Francisco in 1857, and is now in the prime of his life and ripe with experience. Young Meese received his early education in San Francisco and, after a period in college at Fort Wayne, he graduated through the old Heald Business College in the town of his birth.

Meese's first position in business life was as secretary of the Bay Sugar Refinery, from which he resigned to engage int he mercantile business in Sacramento. Quickly making a success in the capital city, Meese came to Oakland and invested his little all here in 1879, and since that time he has been among the most active and useful of Oaklanders.

In 1898 Mr Meese entered public life, being elected a councilman from the Fourth ward. He was later elected at large and served seven years in the city's governing body.

In 1907 Meese was appointed to fill the vacancy caused by the resignation of RB Ayer as treasurer. At the succeeding election Meese's worth was recognized by all parties and his nomination and election were unanimous.

When a member of the city council Meese was elected chairman of the finance committee and thus began his study of the city's finances, and as treasurer Mr Meese has under his supervision the tax collector's office, the bureau of permits and licenses and the street improvement bonds department. In all of these departments methods have been introduced by Mr. Meese which have tended to systematize the work, giving with a minimum of expense a service which is not only appreciated by all those having direct dealings with the office, but which have been copied as models by other municipalities.

Mr Meese would, therefore, appear to have served a long and successful period of training for the position which he seeks at this time, that of commissioner of revenue and finance.

Mr Meese has a charming family. In addition to his wife there is one daughter and a son, who is now attending the University of California.

The Meese family has a plot in Mountain View Cemetery. 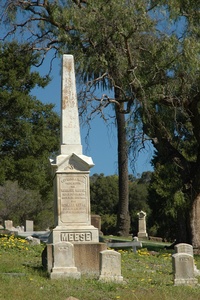 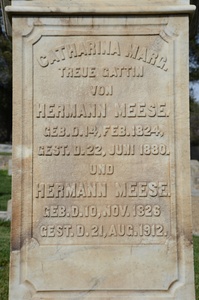