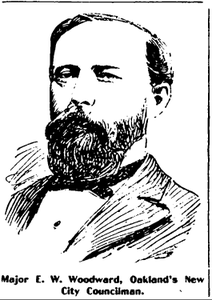 Woodward after being appointed Councilman in 18981Edwin W. Woodward (January 4, 1839 - September 8, 1920) arrived in California from Vermont in 1859, working in mining and merchandising until he volunteered for service in the Union Army during the Civil War.

Following the end of the war, Major Woodward returned to California, and in 1893 Lyon Post No. 8 of the Grand Army of the Republic (GAR) elected him commander.  Major Woodward secured funding for the GAR Civil War Memorial in Mountain View Cemetery, which was dedicated on Memorial Day, May 30, 1893. He arrived in Oakland in 1872 where he spent the majority of his time, at least until his election to Council.3

In 1894 Major Woodward was elected Senior Vice-Department Commander at the GAR annual encampment which was held in Oakland.

In Oakland Woodward worked in the real estate and auction businesses, and was senior partner of Woodward & Taggart, which handled property in Alameda County, as well as other part of California. At some point in the early-mid-1880s he was also involved in a real estate company Woodward & Beach, in San Francisco.8 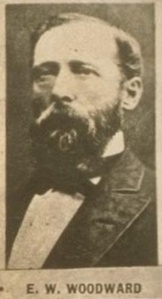 When Woodward moved back to Oakland, he and James Gamble (who built the first transcontinental telegraph lines) formed the partnership of Woodward & Gamble, which appears to have been a real estate firm.

At some point during all of this (1894) he filed for bankruptcy.5  His properties were so underwater that they couldn't even be sold to help get him out of bankruptcy.7 This did not disqualify him from being appointed to City Council in 1898, but it may come as a relief that he was elected to the board of trade prior to (not after) the bankruptcy.6

Woodward was not a popular Councilmember. Only 10 days after his appointment, he was chased from Chambers, onto the street and into a cab. The cause of the scuffle was (of course) the water issue. All of the council was against a proposed resolution that would shut down a fair rate ordinance (that's a double negative) and Mayor Thomas basically told Woodward to vote against it or get back off of the council that he had just been appointed to. (The ordinance would save people money and was very popular in Oakland.) Woodward didn't follow instructions, and the other Councilmen started shouting all kinds of insults at him, which caused the audience to join in. The Chronicle tells a colorful tale:

A corps of friends tried to form a flying wedge for him to rush him along out of harm's way, but the vanguard was whisked aside in a twinkling and Woodward, with red face, disheveled hair and mussed whiskers, was left to the mercies of indignant taxpayers.

When the street had been reached Woodward took to flight. He ran up Fourteent street with an even larger gang at his heels and made no effort now to retaliate or remonstrate. With threats ringing in each ear he circled around the block and finally reached the City Prison, where he sought protection of Captain Fletcher and was given a bodyguard. He sallied forth once more and this time was hurried into a cab, driven up one street and down another until the mob had been lost and then taken home.

This issue went to the Grand Jury for quite awhile and Woodward's "typewriter" Miss Veronica Vogelsanger was questioned repeatedly. It appears that Woodward only fell out of the spotlight when Councilman Brosnahan started waving guns in Council Chambers.