Interestingly, the 1905 Husted's Directory for Oakland listed the family's address as 1313 Madison Street. In 1910, the San Francisco Call described their neighborhood as Stonehurst,2 the census listed their address as East 14th Street, Ward 7, Oakland, and the Husted's Directory for Oakland noted that the house was on E. 14th Street "2 E of Ivy Avenue"—which may be a reference to the former Ivey Avenue, now known as 100th Avenue. By 1913 they had moved to San Francisco.

Stella's name appears frequently in the society pages of the papers of the time, supporting various causes including the Ebell Society and the Fabiola Association.

In 1894, Egbert, his brother Andrew, Horry W. Meek and his brother W. E. Meek, and William J. Landers incorporated the Twenty-Third Avenue Electric Railway, as part of the Oakland, Haywards, and San Leandro Electric Railway consolidated 5, which was the first electric railway between Oakland and Hayward. This was eventually bought and merged into what became the Key System. In 1901, Stone was one of the residents of Elmhurst upset with the fare changes proposed by Frank C. Havens and the Oakland Transit Company. 4

Egbert ran the E. B. and A. L. Stone Company along with his brother Andrew. The Stone Company did work for the Western Pacific Railway in constructing their line through Niles Canyon, as well as through Altamont Pass. In 1908, the company had a dispute with the railway over a bill, amounting to $500,000 difference. 3 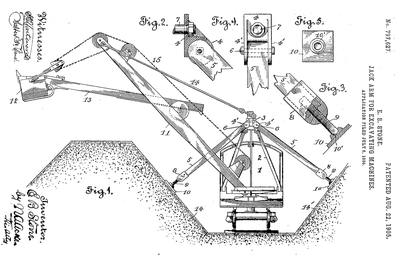 Add a captionIn 1905, Stone was granted patent #797,627 for a "Jack-Arm for Excavating Machines". This invention allowed the use of a longer boom on an excavator, with more safety. 1

According to the obituary for his son, 6 at one point Stone owned the land where Oakland Airport now stands.