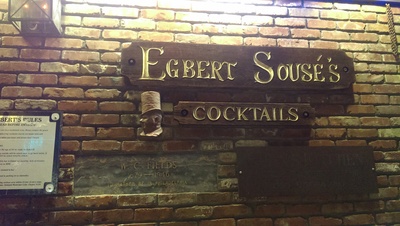 Egbert Souse’s was a bar (some would call it a dive bar) located at 3758 Piedmont Avenue (also home to a Chinese restaurant named Chan’s). Egbert Souse’s is quite controversial in the surrounding neighborhood. A long-time resident of the Piedmont Avenue neighborhood wrote: “I don’t know anybody [who]’s ever been inside this bar” because the bar attracts dangerous customers.

"Named after a W.C. Field's character, Egbert Souse is a dive bar from another era that serves strong drinks at cheap prices and attracts a variety of patrons at astonishingly early hours of the day. If it weren't for the loud rap music and the greasy Chinese food and burgers offered courtesy of Chan's Restaurant, which is part of Egbert's, you would be forgiven for thinking that you'd stepped into a bar from the 1950's." 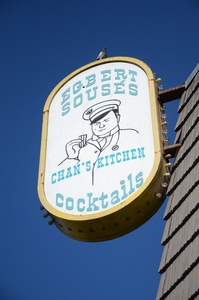 The controversy is related to Egbert Souse’s negative impact on Piedmont Avenue residents, visitors and businesses. The Oakland City Attorney’s Office, in response to public concern about the negative impacts of bars and liquor on the City of Oakland, including Egbert Souse’s, created a position (liquor attorney) dedicated to nuisance and code enforcement prosecution against properties selling alcoholic beverages. The liquor attorney works closely with the Oakland Police Department’s Alcohol Beverage Action Team (ABAT), which collects evidence to be used in litigation and investigates properties believed to be involved in the unlawful sale of alcohol or criminal activity in general. Due to the criminal activity and nuisance associated with Egbert Souse’s, they have been sued by the City of Oakland and placed on the ABAT program.

Egbert Souse’s is allegedly a dangerous source of violence for Piedmont Avenue and the scene of an increasing number of shootings, which was discussed in detail at a meeting with Oakland police and city officials in August of 2013, where neighborhood residents said lives are being made miserable by rowdy activity outside Egbert Souse’s. The local residents complained of frequent gunshots, loud arguments and suspected drug dealing outside and inside of Egbert Souse’s. The residents reported that repeated calls (both 911 and non-emergency) to the Oakland Police Department have not alleviated the problems. The residents were surprised and frustrated that Captain Anthony Toribio, District 2 Area Commander, who was previously Acting Oakland Police Chief for two days said he had received no reports of shootings near the bar, even though residents had called 911 repeatedly to report such incidents.

The owners of Egbert Souse’s, Keun Bae Yoo and Suk Hee Yoo, have repeatedly denied any responsibility for the criminal activity and nuisance related to Egbert Souse’s—they instead blame their customers. Berkeley ESL Exchange Inc. is listed as the owner of the California Alcoholic Beverage Control (ABC) License #472887 for Egbert Souse’s. Owner Keun-Bae Yoo is also listed as a board member on the Oakland Koreatown Northgate district and in 2010 when serving as its vice president Keun Bae Yoo opposed a proposal to open an education center on Telegraph Avenue for prison parolees because of concerns that recently released prisoners hanging out in the area would have a “negative impact” on business. A majority of the neighborhood’s residents are African-American, many of whom supported the center and believed Keun Bae Yoo opposed the plan based on selfish concern for his businesses rather than for the welfare of the neighborhood as a whole. Ironically, Egbert Souse’s attracts prison parolees that the education center was trying to help, yet Keun Bae Yoo would rather sell them drinks than have them receive the valuable assistance the center he opposed would have provided. Keun Bae Yoo has shown he is unconcerned about the negative impact his business has on Piedmont Avenue.

On February 20, 2014 the City Attorney released the following announcement:

OAKLAND, CA - The City Attorney and the Oakland Police Department have reached an agreement with the owners of a Piedmont Avenue bar to address complaints about noise, alleged drug activity and other crimes near the bar.

Last year, the Police Department responded to numerous complaints of nuisance activity and violence associated with Egbert Souse’s bar including three separate shootings in May, October and November of 2013 near the business.

Egbert Souse’s owners met with the City Attorney and police officials in November 2013 after the most recent shooting on the corner of Piedmont Avenue and MacArthur Boulevard which involved patrons of the bar.

The agreement imposes strict operating conditions on the bar. Owners have agreed to hire licensed and uniformed security guards, prevent loitering outside the business and close no later than midnight every day of the week. In addition, the agreement requires that owners promptly remove graffiti from the building and make sure music is not audible outside the premises. The bar also agreed to permanently ban anybody caught using drugs, fighting or possessing a weapon.

City Attorney Parker thanked Oakland police for promptly responding to numerous emergency calls at the bar and for helping to secure stricter operating conditions. She also recognized Egbert Souse’s owners for working with the City to address neighborhood concerns about the business.

“Last year, Oakland spent a disproportionate amount of police resources investigating and responding to crime associated with this business,” Parker said. “Neighbors, police, my Office and the owners all recognized that violence and other problems at this bar constituted a public nuisance and had to stop.”

The City and the bar reached agreement in late January and it became effective immediately. Violation of any of the conditions could result in revocation of the bar’s “Deemed Approved” status, which allows it to operate and sell alcohol.

If You See Problems

Captain Toribio urged residents to call the OPD emergency line – 911 from landlines, (510) 777–3211 from cellphones – whenever they see or hear suspicious activity, and that he will look into shootings at Egbert Souse’s further.

A review of 1912 and 1951 Sanborn maps shows that 3758 Piedmont Avenue was not originally a corner lot. When Moss Avenue was widened to become part of MacArthur Blvd, two buildings south of the commercial space now occupied by Egbert Souse’s were removed, and it also appears a new façade was added to the building.

The bar is named after W.C. Fields’ character in the 1940 film The Bank Dick. As shown in the movie, the name should be pronounced ‘sou-zay’: “Souse—accent grave [sic] over the e!” rather than ‘souse’ (drunkard).

Egbert Souse’s has a drink called The Purple Pussy. According to one source, it is tasty. The name is doubtless another nod to the movie, where Fields’ character spends much of his time at the Black Pussy Cat cafe.

"This one time my friends were driving past this place when a guy stumbled out of it totally drunk and stumbled onto their car and fell asleep. He then started yelling at them and calling them lawyers even though they're teachers and eventually they had to call the cops on him." - anon