Einstein is running for Mayor of Oakland. He cannot officially file because of bias in election law.  He has the most developed platform of any candidate.  He intends to "bring loyalty and dogged perseverance to the office of Mayor of Oakland." He encourages those who want to vote for him to write him onto the ballot. The following is not an official platform and it's currently being created by the people. 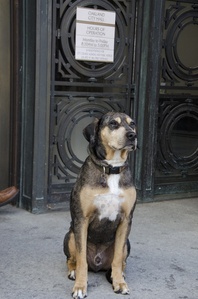 Einstein for Mayor of Oakland, California

Einstein was whelped in Redding, CA, but decided to move to Oakland when he was 9½ weeks old. He is a Catahoula Cur. He was an active participant in the Occupy Oakland encampment, enduring many dozens of hours of frosty GAs. Einstein was flash-banged and tear gassed almost without warning by the police on October 25th, 2011 following the destruction of the first Occupy Oakland camp, and as a result has developed symptoms of canine PTSD, and now becomes very agitated by loud noises like gunfire, firecrackers and backfires, a condition he never had before.

Please note: The OaklandWiki 2014 Mayoral Election Team is making every effort to keep the information on this page up-to-date and neutral as possible. In the spirit of a wiki, however, this page is fully editable. We encourage sourced/sourceable contributions above as well as respectful comments below.