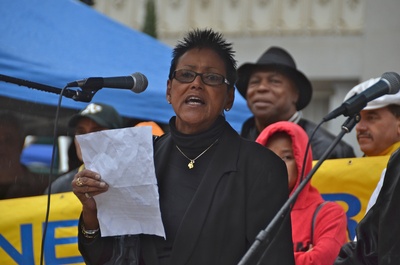 Elaine Brown (born March 2, 1943) is an activist, singer and writer, and was the first chairwoman of the Black Panther Party. Her autobiography is both her personal story and the story of her role in the Black Panther Party. Gives a great oversight into the Party as a whole, though must be understood as being written from Brown's point of view. Includes lots of Oakland history, including the Panthers forays into mainstream politics in the '70s. Available at the Oakland Public Library.

When Huey Newton fled to Cuba facing murder charges in 1974, he appointed Brown the chairwoman. She held that position until 1977. After Huey Newton OK'd the beating of Regina Davis, the administrator of the Panther Liberation School, Brown stepped down as chairwoman, and because of increasing hostility to women in general, she left the Party.

Brown ran for city council in Oakland twice, once in 1973 (when Bobby Seale was running for mayor) and once in 1975.

In 1977, she managed Lionel Wilson's successful campaign to become the first black mayor of Oakland.

In October, 2014, Elaine Brown announced that she would be partnering with Alameda County Supervisor Keith Carson on a development project near West Oakland Bart. The lot will include an urban farm and high rise housing and will employ formerly incarcerated. 1

Also in October, 2014, Jean Quan announced that Brown had endorsed her campaign for reelection for mayor. 2