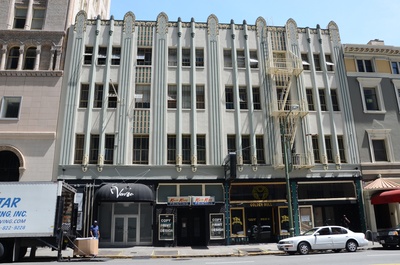 "The four story brick commercial building seats on an interior lot, with four store spaces in the ground floor base and a lodge hall in the three story upper section. The stuccoed and tiled Art Deco facade is divided into six bays by fluted piers with ornate pointed arch caps projecting above the parapet.  The wider bays are further divided by minor pinnacled piers. The window and spandrel heights decrease toward the top floor. The spandrels in the narrow bays are clad with light fold terra cotta tiles with a triangular arch pattern of blue and green tiles. The ground floor storefronts have been remodeled.

This is a 1929 remodeling of a 1902 building whose facade was clad with pressed brick and had curved bay windows, a modillion cornice, and a balustraded center parapet. It is a good example of the Art Deco remodelings that became an important pattern in Downtown Oakland in the Depression era." 1

This historic building is #46 on the list of District Contributors for the Downtown Oakland Historic District Registration Form. 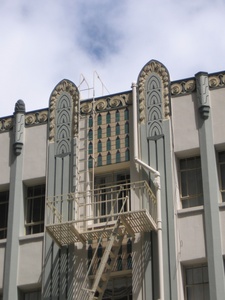