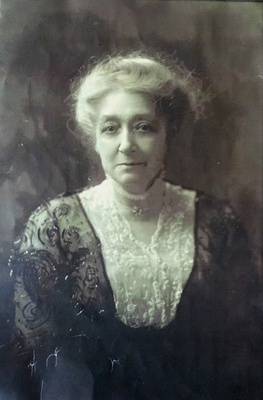 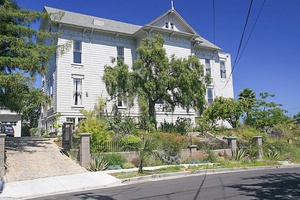 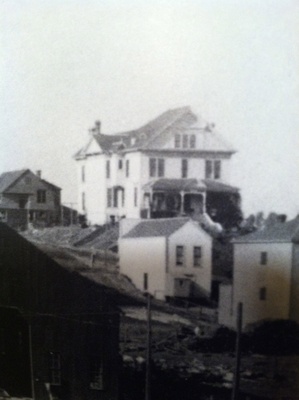 Ellen Kenna House is a large Victorian mansion named after its original owner, Ellen Kenna, at 1218 East 21st Street in the Clinton neighborhood. Designed by architect Augustus Laver and built in 1888. 1 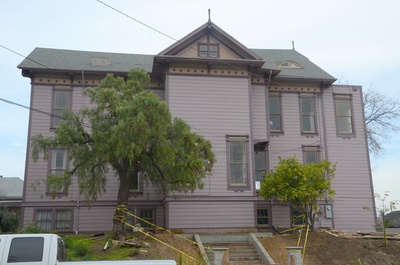 CC SA-BY Our Oakland
The following is from the "History of an Old House" by Gabe Sheridan:

"The fabulous silver bonanza of the Comstock Lode, the "Big Four," a Wild West shooting, a Gold Rush baby born in a covered wagon --- all are in the background of that big house overlooking 13th Avenue on E. 21st Street."

"On April 8, 1874, in an alleyway in Virginia City, Thomas Smith was murdered by an unknown gunman. It was rumored that his mining partner was behind the shooting but the connection was not proven."

"... his widow, Ellen, a rich woman when she returned to San Francisco with the remains of her late husband and young daughter, Blix. There she met a young Irishman, Patrick Kenna, who had been born in a covered wagon en route to the California gold fields."

Sometime in the late 1870's Ellen Smith and Patrick Kenna married. The couple lived on Hobart Street, Oakland in 1879, then moved to Fruitvale in 1880.

In choosing an architect, Ellen Kenna, through her association with silver baron James Flood, decided upon Augustus Laver. The architect had previously designed James Flood's San Francisco home on Nob Hill, which is currently the Pacific Union Club and Linden Towers in Menlo Park.

During the 1890s Ellen Kenna competed with the Valentine's whose nearby mansion cost even more than the Kenna home. On September 24, 1903 Ellen Kenna's daughter Isabel married Irving Burrell in the front west drawing room of the home, with over 150 guests filling the four downstairs parlors. The guest list was a Who's Who of the time, with Adolph Schilling, Borax Smith, John J. Valentine and Father Robert E. Kenna (Patrick Kenna's brother who was a distinguished Jesuit educator). The entire house shone with candlelit to enhance the mood of the ceremony and subsequent reception.

Ellen Kenna continued to live in her home until her death in 1925.

The home was bought by the Pacific Protective Society.  The organization's purpose was to "rehabilitate problem girls" through the "the cultivation of an opportunity for the higher and nobler things in life that characterize true womanhood." 2 From 1928 to at least 1932, Beatrice G. Prosser was the superintendent.2,3 The Pacific Protective Society sold off five lots on the 13th Avenue frontage, where five bungalows were built.

At some point, according to online title records, the property was purchased by Kendall Ray and Rhoada Simmons. In 1980, the Simmonses sold the property to Gabe Sheridan and Frank Rapp, who worked to restore the house into a private residence with some of its former elegance.

In 1982 the house was sold to Bill Brainer and Don Boultinghouse, who continued with additional interior renovations.

In 1990, the house was sold to Center of Third World Organizing (CTWO), who used the home for training and a retreat, with the spacious rooms utilized for meetings and workshops.

The Ellen Kenna Home was purchased in early 2013 by Steve Kopff and Josh Stenzel, who continued the restoration process.

In April of 2016, EJ Blumberg purchased the property, and he owns it to this day.  He too has continued the restoration process,