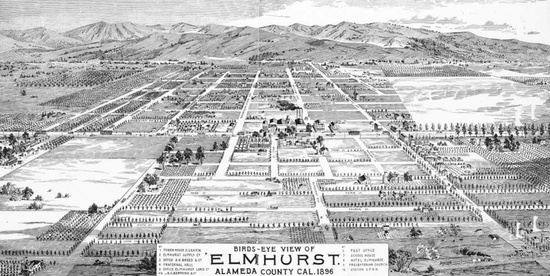 The town of Elmhurst was a small town east of Oakland, which had its own post office, school, and a weekly newspaper, the Elmhurst Review. 3 Elmhurst was incorporated in the City of Oakland on December 8, 1909.

“When location is taken into consideration, it must be admitted that Elmhurst, with its 2,000 inhabitants and its cozy homes, has the finest kind of prospects. That the citizens are beginning to realize this is an undeniable fact; they are taking steps to let the world know that Elmhurst 'is on the map,' and a part of Alameda county.” - Alameda County, 1910

Now Elmhurst refers to the large planning district in East Oakland on the border of San Leandro. 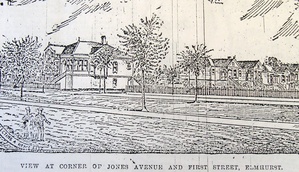 "View at corner of Jones Ave. and First St., Elmhurst" (source: Enquirer, 6/17/1893; Courtesy Oakland History Room, Oakland Public Library)Elmhurst was originally part of the Peralta rancho. In 1842, Luís María Peralta divided the estate between his four sons, and the area now known as Elmhurst was in the area willed to Hermenegildo Ignacio Peralta.

Daniel Webster bought a tract of land from the Peralta grant in the 1870s. He planted a fruit and vegetable orchard there and later sold it to a Lysander Stone (father of Egbert B. Stone and Andrew L. Stone). That area is now known as North Stonehurst. The Southern Pacific Railroad began service through the area in 1877.

Also in the 1870s, a Mr. Andrews bought the Jones tract with the aim of developing it into a potential town. He graded the road from San Leandro Road to the Southern Pacific depot. He organized the graveling of the road, installed cement sidewalks on its southeast side, planted elm trees in the area, and built the Elmhurst Hotel.

In the late 1880s, Elmhurst was still mostly farmhouses scattered in groves of elm trees. 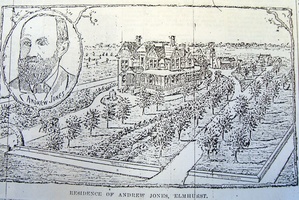 After contacting the owner of the Warner Tract, they took it over for subdivision purposes. They negotiated with the newly-formed Oakland San Leandro & Haywards Electric Railway street car company to have the power house and car house (roundhouse) located on their tract near the corner of 98th Ave. and East 14th St. The Company first began service to this area in 1896 down the route that is now East 14th St/International Blvd.

The area was initially home to several hundred employees of the company, around which the town grew. The Laymance brothers organized events (with exursions, bands, and other entertainments) promoting the area for real estate. Oakland developer A. Jones (described in 1896 in the Oakland Tribune as “Elmhurst’s most public-spirited citizen") built a 14-room mansion on 98th Ave, between B and C Streets. The site was acquired by the City in 1917 and was converted into a park.

The town was named at a meeting of residents (need year!). First the name "Jonestown" was proposed after Andrew Jones, but he apparently declined the honor. Mr. Jones was a large landowner (possibly the person the "Jones Tract" was named after) and farmer.he owned 59 acres and grew tomatoes, cucumbers, peas, squash and peppers. Jones Ave. is named after him. Jones suggested "Hurst Town" after Ed Hurst, but it wasn’t popular with the rest of the group. Someone suggested "Elm Hurst" to honor both the town's distinctive elm trees and for Mr. Hurst and this was the name that was finally approved.

On Dec. 8, 1909, the surrounding districts of Elmhurst (along with the surrounding districts of Fruitvale, Melrose, what was then Fitchburg and is now the Lockwood-Tevis area, and Claremont) voted to annex themselves to Oakland. By 1910, the area had a number of stores, churches, schools, a weekly paper, and a number of fraternal organizations. Electric and steam railways provided a 15 minute ride to Oakland. According to an article in Alameda County (1910, available in the Elmhurst file at the Oakland History Room), by 1910, property values in Berkeley, Piedmont, and Fruitvale (then an independent city) had doubled in the previous five years. The population of Elmhurst had more than doubled during that time.

By 1910, Elmhurst had its own improvement society which worked on making stone sidewalks, lawns and general civic pride. This suburb was known for its weather and proximity to the street cars. Although it was now part of Oakland, people still frequently referred to Elmhurst as a separate town. 2