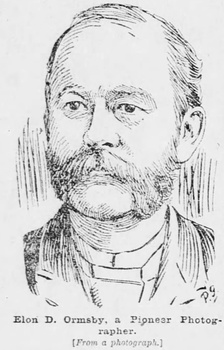 NB: Not to be confused with his nephew, Elon Arwin Ormsby, who was a doctor living in what is now Fremont. Elon A.'s daughter Virginia Grace Ormsby married Sidney Snow. His obituary in the Tribune suggests there was also another nephew with the name Elon who died c.1882. 6

Ormsby was born in 1835 in Michigan to Elijah Seymour Ormsby and Lavinia Mueller (Ormsby). He came to California in 1866 and on July 27, 1868, he married Melissa Carroll (Ormsby) (1847 – March 15, 1910) in Sonoma County. They lived in Illinois for some time, where they had two daughters, Edith May Ormsby (Byron) (Pedgrift) and Ina Belle Ormsby (Pedgrift). They returned to California in 1876, when Ina was 6 months old. 2

In Oakland, the family lived at various locations, including 1306 Harrison, 1002 Chester, and Linda Vista Terrace (Oakland Ave. at Santa Rosa). 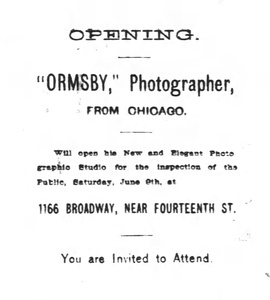 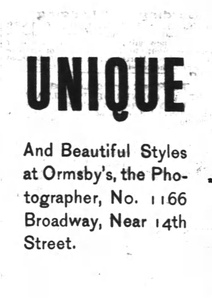 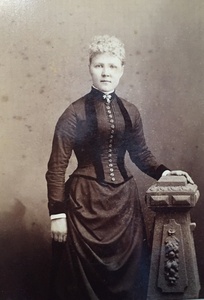 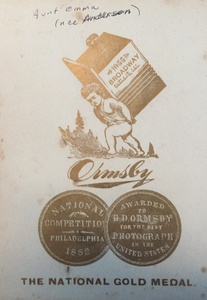 Ormsby won an award from a national competition in Philadelphia for "best photograph in the United States" in 1882, 5 and began to display that on his cabinet cards.

Ormsby retired from his business because of poor health. He contracted pneumonia, and died of heart failure on March 6, 1895. He is buried in Mountain View Cemetery, along with Melissa, Ina and her husband, James Henry Pedgrift, and Edith and her second husband, Samuel Pedgrift.

The unusual typeface for the Ormsby name on the marker is because Ormsby was a member of Woodmen of the World. The marker for George H.C. Fowler, who died around the same time, features the same typeface along with more obvious Woodmen grave symbols. 6,7,8