Ely Playter was born in Toronto, Canada, to Ely Playter (November 30, 1776 – November 29, 1858) of New Jersey and Sophia Playter (January 15, 1788 – November 4, 1838) of Ireland in 1819, and was one of 11 children. Ely's father was known for having served in the War of 1812, and documenting the war and its effects in a diary. His grandfather George Henry Playter was on the British side in the American Revolution and was given a commission and later land. That land, Playter Estates in Toronto, Canada, is named for the family.

The Playter family moved to Niagara county New York when Playter was young. He attended Lima Academy and after graduation he was a teacher and worked on his father's farm. In 1852 he started law school but sailed to California that year before completion. He mined for awhile then in 1860 started business in San Francisco at the hardware firm of Conroy & O'Connor. In 1865 Playter moved to Oakland, but he continued business in San Francisco as a partner at the firm Dunham, Carrigan & Hayden 2

Playter was a director at the Oakland Bank of Savings.

The Playter family had a large house at 14th and Castro that eventually became a "refuge for 'working girls.'" 4

Mr. Playter was a director on the board of associated charities and a director of the Young Children’s Christian Association. He was heavily involved with the First Methodist Church and was the Sunday School superintendent in 1870-1873 and again in 1876 and 1877 and 1879. He was also president of the Police and Fire Commission, secretary of the Board of Police pensions and a trustee of the University of the Pacific.3

Ely Playter died on January 9, 1893 while arguing on the floor of the Board of Public Works about a boulevard around Lake Merritt. 1 Playter is buried in plot 12 in Mountain View Cemetery, along with Sarah, Charlotte, Grace, and Grace's husband Murrey Levering Johnson. Also in the lot are Ely's brother Joel Playter and his wife Elmina Parker (Playter). 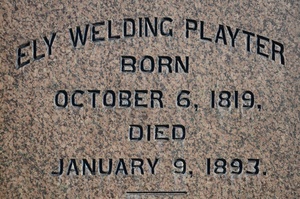 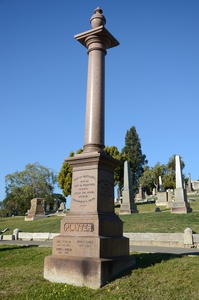