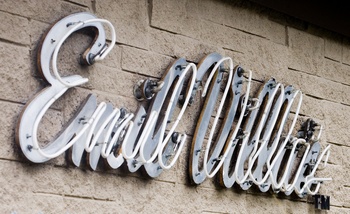 Emil Villa's Hickory Pit (also Emil Villa's Original Hick'ry Pit) is a local chain of barbecue restaurants that was started in Oakland in 1928 by Emil Villa.

According to this entry on Chowhound, a menu at the Hayward restaurant gave some of the history of the chain:

"The first location started in 1928 in Oakland. The secret baste painted on the meats, called Lassyemma or 'pyrocure', originated with the Kiowa tribe and was 'discovered' by Tom Walkingstorm." 1

The entry also indicates that at some point Emil Villa parted ways with the chain, taking some of the branches, and renaming them Original Hick'ry Pit.

The current location of the AAA in Rockridge was the site of an Emil Villa's Original Hick'ry Pit for many years. The restaurant closed in 2004 when the building was damaged by a falling eucalyptus 5,6, and the building was vacant for many years until it was demolished and a new building constructed for AAA. A vintage ashtray ("Pork from pigs that made hogs of themselves") lists the address of the Oakland restaurant as 4392 Telegraph. 4

A still-extant The Original Hick'ry Pit Restaurant in Walnut Creek makes no mention of Oakland, but does provide other info. The originals were purchased in 1979 by Clorox (!), it expanded to 9 restaurants in 1985, and then was purchased by Michael K. & Dave Preuss in 1986. The various remaining locations (Walnut Creek, Hayward, Livermore, Campbell) are now run by different owners.  2

The website for the Emil Villa's Hickory Pit provides what is likely similar to the above-mentioned menu copy, and indicates the first location was on Telegraph in downtown Oakland.

The Story of the “California” Barbecue

California barbecue is the direct descendant of a traditional indian cooking system used by the Kiowas, Araphoes and Ures. we are very fortunate today that an old Kiowa sheepherder named Tom Walkingstorm shared the secret of his ancient indian barbecuing method with the founders of Emil Villa’s california barbecue restaurants.

The indians barbecued over open fires and swabbed their meats with a secret basting solution they called “lassyemma.” They dig a pit about thirty inches deep, near a cliff or in a cave where the fire would have protection from the wind, and where the meats would receive the maximum smoke. During the process, they would intermittently swab the meats with the lassyemma which gave the meats their distinctive flavor and retained the juices, preventing the meats from shrinking.

In 1928, we opened a small storefront on the old trolley line on Telegraph Avenue in downtown Oakland to introduce california barbecue to the world. lassyemma, now known as by its trade name “pyrocure”, was applied with a patented spraying device. Mr. Emil Villa, already known around Oakland for his fine pies, soon gained a reputation for the best barbecued ribs and meats as well. 3

It's likely that "downtown Oakland" refers to the 4392 Telegraph location, which would be the Temescal neighborhood.

c.1918, Emil was working as a baker for Stefano (Steve) Persoglio, and also living at 4298 Telegraph—which was the address of the Liberty Baking Company. 1 Persoglio, a baker who lived nearby at 521 - 46th Street, was partners with his father-in-law, Cesare Orio, running the Liberty Bakery. They also ran a nearby grocery store, 2 likely the same one that Emil and his brother James later took over.

In the 1920s, Emil and James ran the New Liberty Grocery (aka Villa Brothers) at 4228 Telegraph. Mrs. Villa would cook lunch for them in the kitchen behind the store and around lunchtime, local deliverymen delivering produce, dairy, etc. to the store would be invited to have some. Her cooking and undoubtedly Emil's bbq'ing became so popular that the Villas opened a restaurant down the street.

In 1928, Emil opened the first barbecue restaurant nearby at 4392 Telegraph.