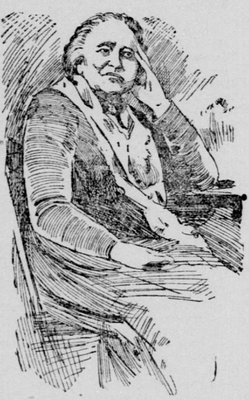 Miss Emma Marwedel 4Emma Marwedel (February 27, 1818 – November 17, 1893) was a pioneering educator, the founder of the kindergarten movement in the U.S, a feminist, and an early proponent of prenatal care.

Emma was born in Münden, Hannover, Germany in 1818 to Captain Heinrich Ludwig Marwedel and Jacobina Carolina Christiana. 2 Her father was a military officer and gave her "an exceptional education" 5, but her parents died before Emma was 11 years old, leaving her in charge of the family.

She trained at the Froebel School in Hamburg, which espoused the benefits of early childhood education. 1 She was an ardent feminist and and in 1865 help found the first women's rights organization in Germany, the German Association for the Advancement of Women. After much research, in 1867 she founded the first industrial art school for women in Germany. 5

She was brought to New York by American feminist Elizabeth Palmer Peabody to start kindergartens and vocational schools to prepare women to become skilled industrial workers. She founded kindergartens in Washington, D.C. in 1872 (where the children of various senators were her students), and then went to Los Angeles where she founded the Pacific Normal Training School and the California Model Kindergarten.

Emma Marwedel died in 1893 in San Francisco. The funeral was held at the First Unitarian Church of Oakland, with Rev. Charles W. Wendte presiding. 3 She was buried in plot 11 in Mountain View Cemetery. The grave marker looks like children's toy blocks; the forms of the sphere, cylinder, and cube comprise the "second gift", materials fundamental to kindergarten education as designed by Friedrich Froebel, to which Marwedel dedicated her life. Her grave marker bears the inscription "She Loved Little Children." 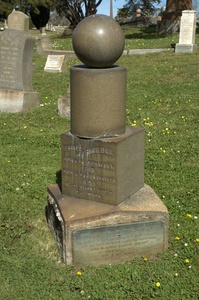 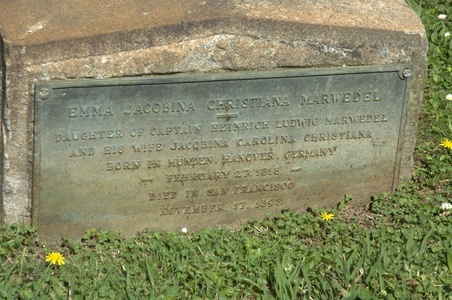