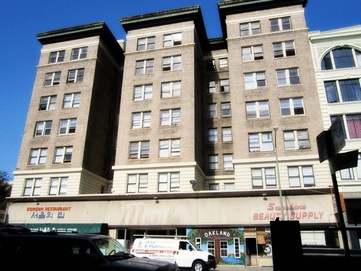 The Empyrean Towers are located at 344 - 13th Street, in Downtown Oakland, California. The target customers are 'professionals, students and travelers.' Not to be confused with the Hotel Oakland which is in the next block down.

The Empyrean Towers Apartments were originally the Hotel Menlo, a residence hotel, until about 2011 when its owner, Richard Singer, was convicted of an arson plot to burn it down3 and sentenced to a $60,000 fine and 27 months in prison.8  Ironically, "empyrean" means "the highest heaven, supposed by the ancients to contain the pure element of fire."

The apartments feature a mural on the front by Chuck Light.

After complaints from residents and repeated code violations 4, the building was finally red-tagged by the city in May 7, 2015 because of contaminated water. 5

Oakland Housing Authority worked with a developer to convert 99 SRO units into 66 affordable studio and 1-bedroom apartments,6 and this work was completed in 2020.7 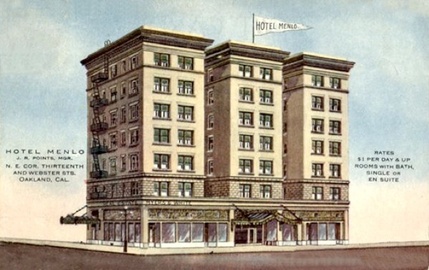