Eric Sogard is a baseball player for the Oakland Athletics. Primarily a middle infielder, he played part of the 2010, 2011, 2012 and 2013 seasons with the A's. He currently platoons at 2nd and short.

He wears glasses, which are the author of a blog on MLB's website: http://ericsogardsglasses.mlblogs.com/ 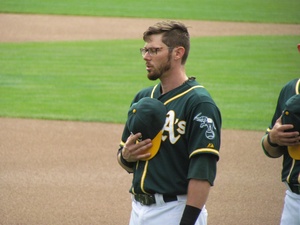 Eric Sogard, in his glasses. Photo CC BY-NC-ND 2.0 by Dinur

In February, 2014, Eric Sogard was defeated in the final hour (literally) of the finals for the #faceofmlb contest. A's fans , along with some people who don't really care about baseball but do care about Oakland, had some seriously awesome tweeting going on and many feel he should have won.

Some of the awesome tweets: