Ernest Natali Lombardi (aka Ernie Lombardi) (April 6, 1908 - September 26, 1977) was an Oakland native who as a Major League Baseball catcher played professional baseball for 17 years (1931-1947) with the Cincinnati Reds, the Boston Braves, and the New York Giants. In 1986 Lombardi was inducted into the MLB Hall of Fame. 1,2

Ernie Lombardi, who was born in Oakland, attended Cole Elementary School through the eighth grade. There is an account which states that Lombardi left school to help his parents run their small Italian grocery store for several years before joining the Oakland Oaks in 1926/27, 3 while there are other sources which list him as attending/graduating from McClymonds High School in Oakland. 4 Another source also refers to "Upon finishing grammar school, Lombardi loses his chance to letter in the sport he loves when he skips high school to work in his father's grocery store." 5

In April 1953 Lombardi, who had suffered from Depression for years, attempted suicide by slicing his throat with a razor from ear to ear. Although newspapers at the time reported him close to death, Lombardi went on to fully recover. 2, 5

Ernie died October 26, 1977, and is interned in Mountain View Cemetery. 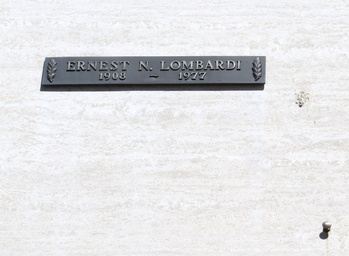