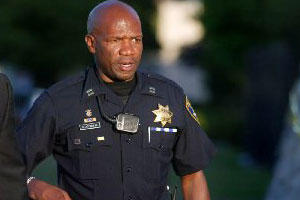 Captain Ersie Joyner is a Captain with the Oakland Police Department. When police districts were assigned in 2013, he was assigned Police District 5 but when the district assignments were updated he was no longer on the list.

In a 2010 video, Captain Joyner said that he lives and was born in Oakland.1

In 2011, Captain Joyner was under investigation for misconduct for approving the use of beanbags against Occupy Oakland protesters on November 2, 2011. He gave an order that officers could use beanbags against “anarchists” if they approached the police line. (source?) This is in direct contradiction to Oakland Police’s Crowd Control Policy which states:

”Direct Fired SIM (Specialty Impact Munitions, e.g. beanbags) shall only be used against a specific individual who is engaging in conduct that poses an immediate threat of loss of life or serious bodily injury to themselves, officers or the general pubic when other means of arrest are unsafe, or who is engaging in substantial destruction or which creates an imminent risk to the lives or safety of other persons, and when the individual can be targeted without endangering other crowd members or bystanders. (See Special Order No. 8135 enacted April 15, 2004.)”

In an interview Captain Joyner said that he could be fired or demoted for this misconduct and he was temporarily reassigned to a desk job.2 It is unclear what action was taken, or why he was given the prestigious D5 job.

Captain Joyner was also involved in an incident on Curran Avenue in 2011, which led to two deaths. The Alameda County District Attorney’s office cleared Joyner in the shooting, but a suit has been filed against the city.3

In March, 2013, Joyner was involved in another incident in which he exchanged blows with parolee Dantjuan McElroy. Joyner followed him, says he saw a gun, and didn’t have a taser. McElroy said he was going to fight Joyner and the two fought until another officer arrived with a taser.5

Joyner has five shootings on his record, the most of any member of the department.4

Captain Ersie Joyner is one of Oakland’s highest paid employees, with a total compensation in 2011 of $252,286.

In March, 2014, Joyner received an award at the Neighborhood Champions Award Ceremony.