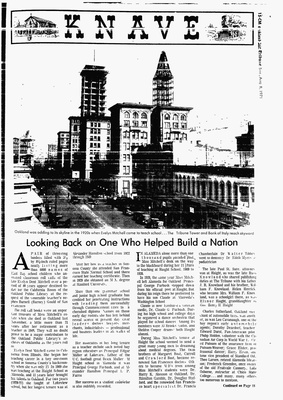 Evelyn Dent Mitchell (February 5, 1883 – October 4, 1970) was a long-time teacher of literature and English with the Oakland School District.

She began teaching in a one-room schoolhouse in Sonoma County when she was 15. She then attended the San Francisco State Normal School and got an M. A. from Stanford University. 1

In 1909 she began teaching in Alameda, and in 1920 moved and began teaching in Oakland. From 1920 to 1921, she taught at Lakeview Elementary School, but most of her career was at Alexander Hamilton Jr. High School (now Calvin Simmons Middle School), from 1922 until her retirement in 1949. 1

Mitchell taught over 1,000 students in Alameda, and more than 6,000 students in Oakland. Her students included Joseph R. Knowland. The collection of her roll calls were given to the Oakland History Room.